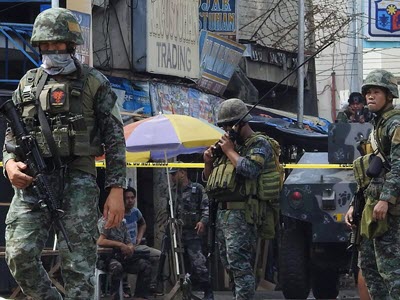 How Can Terrorist Messaging Be Countered in Southeast Asia?

2018 saw a notable continuation of terrorist activities in Southeast Asia. To put the past year’s attacks in context and gain greater insight into what can be done to preemptively counteract terrorist messaging in Southeast Asia, Mary Hamilton, an intern for the John M. Shalikashvili Chair in National Security Studies and research programs at NBR, interviewed Christopher Harmon, terrorism specialist and the Donald Bren Chair of Great Power Competition at Marine Corps University.

What impact do terrorist groups in Southeast Asia have on the United States’ regional interests?
International terrorism by definition affects every country in the world. The United States has wrestled with terrorism for decades and from the late 1980s to early 1990s has shared with its Asian counterparts concerns about the movement of people trained by al Qaeda. When ISIS was formed in 2014, it struck me as the second chapter in the question of international Salafist militancy as it affects Asia, the United States, and many other places in the world. The United Nations’ interest in terrorism also demonstrates that it is of global relevance. When I was a young scholar there was little constructive work done by the United Nations with respect to terrorism. Now, under Chapter 7 of the UN Charter, the United Nations has passed the most rigorous kinds of Security Council resolutions and proscriptions aimed at combatting terrorism, so that at least on paper terrorism is banned in contemporary international law. INTERPOL (where I’ve lectured on how terrorist groups end) used to basically ignore terrorism on the principal basis that it is too political. However, under General Secretary Ronald Noble, terrorism became a priority. In addition to the mutual interest that all countries have in combating terrorism, another vested interest the United States has in terrorism in Southeast Asia has to do with our bilateral relations with allies and partners in the region, such as our century-old relationship with the Philippines. While the New People’s Army (NPA) is not attacking the United States today, it did so before and could possibly do so in the future. Thus, we share the Philippine government’s ongoing interest in defeating the NPA.

Can you provide a big-picture perspective on the terrorist groups operating in Southeast Asia and their main objectives and current operations?
One approach to understanding terrorist groups in Southeast Asia would be based on what I see as a contrast between rooted insurgencies in Asia and deracinated international terrorists passing through the region. In the former situation, in countries like Myanmar, Thailand, and the Philippines, we are seeing Asian countries wrestling with long-running insurgencies that often don’t fight across borders. In the latter case, we’re seeing regional countries also feeling the pressures of ISIS, al Qaeda, and other transnational terrorists groups that pass through their borders and represent a different kind of problem.

Malaysia is an example of a pass-through country. It does not have a large, well-organized terrorist underground; but the country has had problems with international terrorist groups using it for banking, recruitment, communications, and travel. Several hundred Malaysian citizens have also joined ISIS in Syria, and it is unclear how many have returned.

Of the major groups operating in Southeast Asia, the NPA in the Philippines is a classic Maoist group. The more recent Philippine problem, however, has come from international Sunni militants such as Abu Sayyaf, which is rooted in the southwest islands of the Philippines. There is a similar Sunni terrorist presence in Indonesia. Although Jemaah Islamiyah has been largely defeated, its offshoots called Mujahidin Indonesia Timur and Jamaah Ansharut Tauhid still have active members. The challenge to secular democratic governments in the region thus remains strong.

Shia activism and militancy are also visible in Asia, but less so. Examples include bombings in Bangkok and plots that were interrupted by Thai police and were found to be linked to Iran and Hezbollah. It is also important to remember that other ideologies and religious faiths have inspired offshoot terrorist organizations. It used to be a commonplace argument among Western social scientists talking about militant Islam that there was something seriously troubling about current patterns in the Muslim faith because other religions like Buddhism were not showing the same kinds of militancy. The situation in Myanmar today shows that this kind of violence can come from any source.

What are some of the media strategies and messaging techniques employed by terrorist groups in Southeast Asia?
What I learned most in doing the book The Terrorist Argument was that most groups employ a great range of propaganda, and yet today we tend to focus solely on terrorists’ use of social media. Many important terrorist groups predate the social media era and demonstrate that other means can be just as effective. The oldest kinds of effective propaganda are simply the human voice and human contact. Charismatic leaders can sit down with you or make a speech in your high school gymnasium. A brother or a sister who has been given an ideological virus can pass it along with warmth to friends and family. There are a lot of very local and immediate kinds of propaganda.

For terrorist organizations, poetry, song, and oral propaganda all come in the same kind of packaging. They rely on sentiment, clever and imaginative arguments, a friendly attitude, and other factors that are about as low-tech as it gets. Jose Maria Sison, founder of the Communist Party of the Philippines and co-founder of the NPA, is a prolific speaker who does radio and television broadcasts as well as print interviews. He continues to publish and republish his own materials, which come out in fresh paperback forms with some frequency, and is involved in the production of the magazine Liberation. He’s also a musician who sings and does musical albums that have revolutionary-style poetry. This combination of classic Maoist recruiting techniques—operating in the neighborhoods, among the poor, among the indignant, and among those who have a beef with the government—and propaganda efforts is one reason the NPA has been able to survive for 50 years. The NPA is thus a great case study in terrorist messaging techniques because we can observe the full range of human and technical propaganda activity by studying its methods.

How effective are government-led counter-messaging campaigns in Southeast Asia?
I think the picture is mixed and unsatisfying. I believe that there are limited successes visible in places like Singapore and Indonesia, but I don’t think these campaigns have been all that successful in the Philippines and in some other countries of interest. One of the strengths that Indonesians and Singaporeans share is a strong sense of nationhood, which enables them to advance an alternative message that does not simply criticize extremism but also is focused on strengthening their own nation through a conversation about what they, as a country, stand for. The five principles of Pancasila in the Indonesian world and the sense of unity in a complicated, small place that prevails in Singapore are very good examples of how central governments can resist criticism by militants.

What these examples show is that a whole-of-society response to terrorism is needed. I don’t think the United States has such a policy and strategy for addressing violent extremism, and I don’t think most governments in Asia do either. In terms of countering terrorist messaging in the United States, it would be very easy for any current senior official of cabinet level to directly promote moderate voices from abroad, bring them to the White House, let them have a forum at the Department of State, and take other steps to show that we respect them and see them as good spokespersons against extremists. A second step would be the use of defectors in a counter-messaging campaign. When someone has left one of these violent movements overseas, we should expose the public to their experience. This type of approach does not require a collaborative synchronization effort with other parts of government; it just requires a recognition that defectors are a particularly effective kind of speaker, if the person in question is articulate. Combining a larger effort, in terms of politics, with smaller micro-efforts that can be made by almost anybody—including a military commander overseas, an intelligence agency, or an academic conference—to create a whole-of-society approach would be very effective.

Christopher C. Harmon is the Donald Bren Chair of Great Power Competition at Marine Corps University. Dr. Harmon is the principal author of a new book The Terrorist Argument: Modern Advocacy and Propaganda (2018), which uses nine case studies to explore the messaging techniques and media strategies employed by terrorist groups around the world to further their aims.

This interview was conducted by Mary Hamilton, an Intern for the John M. Shalikashvili Chair in National Security Studies and research programs at NBR.