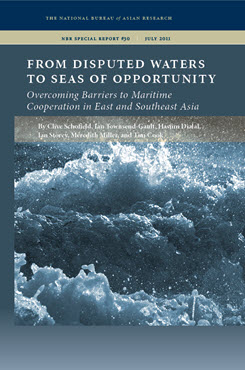 This report highlights findings from the National Bureau of Asian Research’s three-year project “Maritime Energy Resources in Asia: Opportunities for Joint Development,” which assesses maritime jurisdictional disputes and opportunities for cooperation in East and Southeast Asia.

Long-standing disputes over maritime jurisdictional claims in the East China Sea, South China Sea, and Gulf of Thailand threaten the long-term stability and prosperity of states in East and Southeast Asia. Despite numerous multilateral efforts in recent decades and international legal regimes such as the UN Convention on the Law of the Sea, tensions among claimant states and user states remain high. Resolution of these disputes has eluded the claimant states, given the complexity of the domestic political, historic, legal, economic, and strategic factors involved and the pressure to develop the estimated vast energy resources in the disputed areas. Concerns over resource access, coupled with the claimant states’ failure to implement confidence-building measures (CBM) to ease tensions, demonstrate that political resolution is unlikely in the near term. In the absence of a long-term agreement, claimant states must take concerted interim actions to ease tensions, foster cooperation and trust, and maintain joint stewardship of the environment and marine resources.

From Disputed Waters to Seas of Opportunity: Overcoming Barriers to Maritime Cooperation in East and Southeast Asia
This site uses cookies. Please read our Privacy Policy to learn how and why we use cookies.