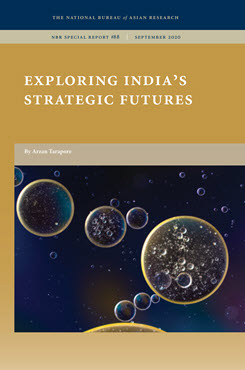 This report uses a novel alternative futures methodology to demonstrate that India’s strategic preferences are not fixed but could vary discontinuously under different environmental conditions.

The method of major/minor trends developed in this report suggests that the roots of apparently surprising future behavior can be found in a close reading of a target state’s history. Using this method, the report outlines three unlikely but plausible alternative futures of India as a strategic actor. The first scenario envisions India as a Hindu-nationalist revisionist power hostile to Pakistan but accommodating of China; in the second, it is a militarily risk-acceptant state that provokes dangerous crises with China; and in the third scenario, India is a staunch competitor to China that achieves some success through partnerships with other U.S. rivals like Russia and Iran. These scenarios are designed not to predict the future but to sensitize U.S. policymakers to possible strategic disruptions. They also serve to highlight risks and tensions in current policy.

The scenarios yield at least three major analytic insights that are relevant for today’s policymakers:

Arzan Tarapore is a Research Scholar on South Asia at the Walter H. Shorenstein Asia-Pacific Research Center at Stanford University and a Nonresident Fellow at the National Bureau of Asian Research.