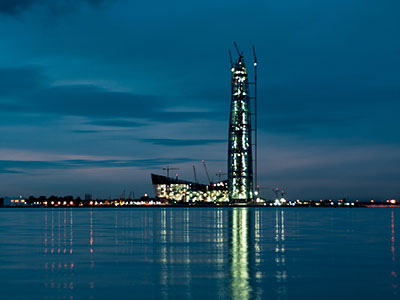 Keun-Wook Paik (Oxford Institute for Energy Studies) discusses the latest developments in Russian-Asian energy cooperation, provides the perspective from South Korea, and assesses the potential for future projects in the region.

Russia is one of the largest producers of oil and gas in the world and has increasingly turned toward Asian markets as a destination for its energy exports. Greater cooperation between Russia and Asian countries on the development of pipelines and other oil and gas projects has the potential to transform regional and global energy markets, with significant geopolitical implications. While most of the recent high-profile deals have been between Russia and China, the Republic of Korea and other countries in Asia have pursued opportunities as well. These projects, however, will require time and large-scale investment to expand production and related infrastructure.

In this Q&A, Keun-Wook Paik (Oxford Institute for Energy Studies) discusses the latest developments in Russian-Asian energy cooperation, provides the perspective from the ROK, and assesses the potential for future projects in the region.

What does the general picture of Russian-Asian energy cooperation look like today? Where does the ROK fit into this?

Russian-Asian energy cooperation has been driven by Sino-Russian oil and gas cooperation, even though Russia did not wish to put all of its eggs in one basket called China. In the case of the oil sector, the completion of the 4,188-kilometer Eastern Siberia–Pacific Ocean (ESPO) pipeline, which is operated by Transneft and was constructed in late 2009 to transport crude oil from Russian fields to China, allowed Russia to enter the Asian market and transformed it into the swing oil supplier for the European and Asian oil markets.

However, achievements in the gas sector were very slow due to the tedious negotiations between Gazprom and China National Petroleum Company (CNPC). The two companies signed a 30-year sales and purchase agreement in May 2014 to develop the Power of Siberia–1 gas pipeline, a 3,000-kilometer pipeline from Eastern Russia to China that is set to commence operations on December 20, 2019. Russian gas thus entered the Asian market as many as ten years after the entry of Russian crude oil. Even if gas from the Power of Siberia–1 pipeline begins to flow, Russia will not be an effective swing supplier between European and Asian gas markets until the completion of the Altai pipeline (or Power of Siberia–2), a proposed natural gas pipeline connecting Russia’s western Siberia to northwest China that could supply 30 billion cubic meters (bcm) per year for 30 years.

The role of the ROK in Russian-Asian energy cooperation has been negligible so far. Strictly speaking, it was a passive and timid player in responding to Russia’s initiative to enter the Asian oil and gas market. The ROK cannot compete against China, which is a massive market that can offer financing and loans to Russia and has been the driving force behind its turn toward Asia.

What steps have the ROK and Russia taken recently to increase cooperation in the energy sector? Strategically, what are each country’s goals?

The PCNEC is reviewing whether to participate in Russia’s Arctic LNG–2 project, which is being developed by Novatek. KOGAS has been analyzing the potential for LNG imports, Hyundai Engineering is exploring possible developments with port facilities, and Daewoo Shipbuilding and Marine Engineering (DSME) is evaluating the potential construction of additional icebreaking LNG tankers. Negative Korean public opinion on the government’s investments in overseas gas development and strengthened U.S. sanctions against Russia are two of the major obstacles. Although ROK authorities are keen on participating in the project, they cannot completely ignore U.S. sanctions against Russia either. However, I believe it ultimately is inevitable that the Moon administration will instruct KOGAS to take up to 3.5 mt per year of LNG imports from the Arctic LNG–2 project to ensure that DSME will secure the construction order for icebreaking LNG tankers and participation in the transshipment terminal being developed on the Kamchatka Peninsula in the Russian Far East.

The gas sector is a big area of potential cooperation between Russia and the ROK. Right after the summit between the United States and the Democratic People’s Republic of Korea (DPRK) on June 12 in Singapore, President Moon made a state visit to Moscow, and on June 22 Novatek confirmed it had signed a memorandum of understanding (MOU) with KOGAS. Strictly speaking, this Arctic LNG–2 supply issue is not linked with President Vladimir Putin’s dream of a Russian gas pipeline extension to the Korean Peninsula through the DPRK. The supply source that is immediately available for the Russia-DPRK-ROK (R-D-R) pipeline is the 8 bcm per year from the Sakhalin-1 project. Sakhalin-2’s LNG expansion scheme desperately needs to secure this volume of gas, but nothing is decided. If the outcome of the U.S.-DPRK summit is convincing and solid enough, Washington could promote the option of Sakhalin-1 gas supply to the Korean Peninsula, with participation by U.S. energy companies. From the viewpoint of the ROK’s conservative bureaucrats, the development of the R-D-R gas pipeline would mean obstacle-free gas supply security for the ROK. This project will be very difficult for Russia to complete on its own, but it can be achieved with the participation of the United States.

The R-D-R pipeline was proposed ten years ago but then largely abandoned due to rising tensions on the Korean Peninsula. Is this project viable again? Given the ROK’s dependence on LNG imports, what impact would Russian pipeline gas have on the country and the region?

While it is too early to reach a verdict yet on the impact of the U.S.-DPRK summit in Singapore, Russia lost no time in reviving the R-D-R gas pipeline initiative, and the ROK government agreed to reactivate the study of the development of this pipeline. The prerequisites for development of the pipeline are the satisfactory resolution of the denuclearization issue and price competitiveness. Once these two main factors are satisfactorily addressed, the project will be able to move forward.

In parallel with delivery of Power of Siberia–1 gas supply to the Bohai Bay market starting in December 2019, the introduction of the R-D-R gas pipeline to the Korean Peninsula will realize Russia’s dream of diversifying its buyer base in Asia. In particular, it will signal Russia’s full engagement with two large gas markets in Asia—China and the ROK. In addition, following the successful launch in late 2017 of the first cargo export to Asia from train 1 of Novatek’s Yamal LNG project, Russia is now well-positioned to enter the Asian gas market with both pipeline gas and LNG simultaneously.

It is worth noting that the Power of Siberia–1 gas supply of around 25 bcm per year (out of the total 38 bcm per year) for Heilongjiang, Jilin, and Liaoning Provinces and Hebei Province in Bohai Bay is not that vulnerable to competition from LNG supply. Similarly, the 8 bcm per year of gas from the R-D-R pipeline would be well-protected by the unique situation of this supply option.

Has there been competition between countries in East Asia over Russian energy assets or projects? How has China’s “dash for gas” affected regional energy dynamics? From the Russian perspective, is there a priority to develop pipeline gas rather than LNG?

In spring 2016, Rosneft hurriedly prioritized an Indian consortium over the Beijing Gas Group (BGG) with regard to the Taas-Yuriakh oil and gas field’s equity dilution, despite the fact that BGG was already in the final stage of its due-diligence process. This case confirmed that Russia is determined to reduce its dependence on the Chinese market. In summer 2016, Rosneft was forced to offer the Verkhne-Chonskoye oil and gas field to BGG to replace the Taas-Yuriakh field that had been given away to an Indian consortium led by the Oil and Natural Gas Corporation (ONGC). The provision of a $12 billion loan for Novatek’s Yamal LNG development in late April 2016 indirectly pressured Rosneft, which wanted to avoid having to secure third-party access for BGG. As the largest gas provider for the Bohai Bay rim areas, in particular Beijing and Tianjin, BGG could be a big beneficiary if third-party access to the Power of Siberia–1 is granted to Rosneft.

During late 2017 and early 2018, China’s rushed transition from coal to gas without proper preparation delivered a big financial burden to gas consumers in the Bohai Bay rim areas. If China had accelerated the construction of Line D of the Central Asia–China gas pipeline, which would have carried 30 bcm of Turkmen gas to Chinese markets, it would have eased the shortage in pipeline gas supply. But the most regrettable misstep was and is the failure to make progress on the Altai, or Power of Siberia–2, gas pipeline after an MOU was signed between China and Russia. This lack of progress, combined with Gazprom’s failure both to acknowledge the global influence of the U.S. shale gas revolution and to open the upstream sector to CNPC, in addition to the massive potential for LNG exports based on onshore Arctic gas reserves by Novatek’s Yamal and Arctic LNG–2, has affected Gazprom’s Asia policy fundamentally. The company’s prioritization of pipeline gas exports will not change, regardless of developments in the European and Asian gas markets.

The United States has recently increased its marketing of LNG exports to buyers in Northeast Asia. Has a competitive dynamic between U.S. LNG and Russian gas emerged? How does the ROK view Russian-U.S. energy competition?

In December 2017, in a paper for the Oxford Institute for Energy Studies, Jonathan Stern questioned the logic of suppliers that were waiting for global gas markets to tighten to bring prices back to levels that could promote new investment, especially with regard to greenfield LNG projects. As James Henderson writes in the preface of the paper, “A key assertion is that the disparity between the likely cost of new LNG projects and the affordable price of gas in many future growth markets will need to be closed by a focus on cost reduction by project developers, rather than by a hope that higher prices and rising demand will be sustainable at the same time.” Stern concluded that “the key to gas fulfilling its potential role as a ‘transition fuel’ up to and beyond 2030 is that it must be delivered to high-income markets below $8 per million British thermal units (mmbtu), and to low-income markets below $6 per mmbtu (and ideally closer to $5 per mmbtu). The major challenge to the future of gas will be to ensure that it does not become (and in many low-income countries remain) unaffordable and/or uncompetitive, long before its emissions make it unburnable.”

The ROK is very mindful of the price competitiveness of imported LNG and is fully aware of the competitiveness of Arctic LNG–2 supplies against LNG from the United States. Due to U.S. sanctions against Russia, however, the ROK must tread very carefully. During the Lee Myung-bak administration (2008–13), the 8–10 bcm per year of pipeline gas from the Sakhalin-1 project was believed to be 30% cheaper than LNG supply options. Whether the price advantage of Sakhalin-1 gas will be that big remains to be seen. Regardless of the price benefits, an R-D-R gas pipeline would enjoy special status as the peace gas pipeline for the Korean Peninsula. But the prerequisite is that satisfactory progress must be made on denuclearization.

Keun-Wook Paik is a Senior Research Fellow at the Oxford Institute for Energy Studies and an Associate Fellow of the Chatham House Energy, Environment, and Development Programme. An expert on Eurasian energy, Dr. Paik is the author of numerous publications on the subject, including the book Sino-Russian Oil and Gas Cooperation: The Reality and Implications (2012). Dr. Paik is an advisor for NBR’s Pacific Energy Summit series.

This interview was conducted by Jeanne Choi, an Intern with the Trade, Economic, and Energy Affairs group at NBR.