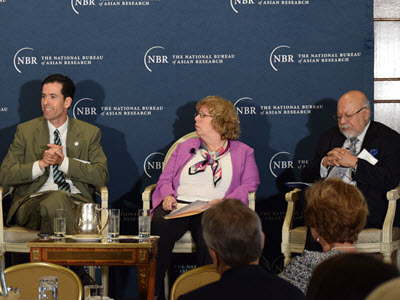 In this episode of NBR’s Asia Insight podcast series, Daniel Twining, Carolyn Bartholomew, and Tariq Karim examine the recent Hong Kong protests, discuss democratic trends in Asia, and analyze tensions between democratic and authoritarian forces in the region. The discussion, moderated by Michael Wills, took place at the Asia Policy Assembly on June 19.

Daniel Twining is President of the International Republican Institute.

Carolyn Bartholomew is Chairman of the U.S.–China Economic and Security Review Commission.

Tariq Karim is the former High Commissioner of Bangladesh to India.

This panel is moderated by Michael Wills, Executive Vice President at NBR.

[3:09] Wills introduces the panelists and the topic.

[5:16] Twining discusses the meaning and impact of the recent Hong Kong protests.

[6:20] He assesses the reactions inside and outside China to President Xi Jinping’s attempt to consolidate power.

[7:54] He analyzes the success of democracy in Southeast Asian countries like India and Indonesia.

[8:52] He highlights the recent elections in Malaysia, where an opposition coalition defeated the long-time ruling party.

[9:54] He emphasizes how democratic principles are valued even in countries with a more authoritarian ruler.

[10:39] He provides some issues and concerns with implementing and maintaining democratic forms of government.

[13:00] He examines the trend in Asia toward a freer society, and how this trend is beneficial to economic growth.

[15:46] Bartholomew adds her thoughts about the success and importance of the recent Hong Kong protests.

[17:45] She highlights the dedication and commitment of Hong Kong journalists to cover the protests amid police targeting.

[19:16] She criticizes the response and actions of Hong Kong police to the protests.

[22:34] She discusses the use of censorship in China to spread propaganda about the Hong Kong protests.

[23:34] She explains how the Hong Kong protests influenced the political climate in Taiwan.

[27:23] Karim observes that democracy in South Asia is in no better or worse shape than democracies around the world, but that it is still young.

[28:31] He emphasizes that attaining a democracy like the United Kingdom’s is a process that takes time.

[33:25] He assesses the constant struggle between authoritarianism and democracy in Bangladesh.

[34:39] He explains that democracy in Asia still has its flaws and concerns about majoritarian rule.

[38:05] He discusses his experiences living in Beijing during the Tiananmen Square incident and compares it to the situation in Hong Kong.

[42:38] Bartholomew examines the growing China-Russia relationship and its impact on the United States.

This podcast was edited by Owen Nguyen at NBR.