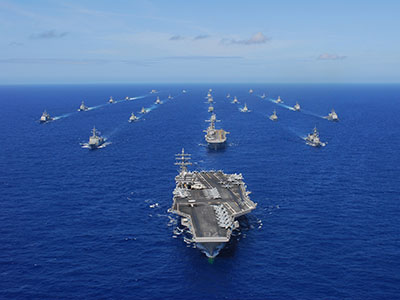 Admiral Jonathan Greenert (ret.), former U.S. chief of naval operations, discusses U.S. maritime and security interests in the Asia-Pacific and provides recommendations on how to maintain regional stability and ensure commitments to allies in an interview with NBR.

As the intersection of Asia-Pacific countries’ maritime interests becomes increasingly complex, the regional maritime commons have in turn become a salient factor in the strategic calculus of U.S. interests. How the United States interacts with vested players and responds to contingencies will have implications for the future of the regional security architecture and shape the content of international norms in the years to come. Against this critical backdrop, NBR interviewed Admiral Jonathan Greenert (ret.), former U.S. chief of naval operations and the current holder of NBR’s John M. Shalikashvili Chair in National Security Studies.

What do you perceive as the primary issues in the Asia-Pacific, and what might the United States do to address them?

However, in my opinion the potential for conflict in the East China Sea is greater than in the South China Sea. The disputes in the South China Sea are significant and clearly noteworthy. But Japan and China have a tumultuous history, and at best a nascent diplomatic and military-military (mil-mil) relationship—they lack a means for peaceful resolution. They currently have neither the enduring means nor a relationship that facilitates a diplomatic solution to maritime disputes. East China Sea issues tend to be infused with emotion and nationalism. There is what I would call less proportionality (fewer options) in the East China Sea than in the South China Sea. That portends a situation that could quickly escalate. This is not to dismiss the China-Taiwan situation. However, for at least the near term, there has been (perhaps) a strategic pause. It has been easier to discuss options to avoid China-Taiwan instability or conflict, in my experience.

What can the United States do to mitigate the effects of these challenges to maritime security?

The situation is evolving in the South China Sea. Countries involved in the disputes are talking and invoking an international regime—the United Nations Convention on the Law of the Sea (UNCLOS). We should focus on the bigger picture: what do we envision our role to be in the future of the South China Sea, and what would bring enduring stability?

We should take a broader approach in shaping the strategic landscape and decide on an appropriate response for future disputes. There are initiatives to shape the strategic environment. One opportunity occurred earlier this summer—RIMPAC (the Rim of the Pacific exercise). It included China and dozens of other navies and is an excellent means to engage sailors and form ad hoc coalitions for relevant exercises. So, we need to stay the course on engagement, while at the same time helping our potential partners and allies, for example the Philippines, to engage China and move ASEAN in a direction to be effective.

In summary, we need consistency, resolve, and a broad coherent strategy. This should be high on the next administration’s national security agenda.

During your time as the chief of naval operations (CNO), you met with your counterpart in the People’s Liberation Army (PLA) Navy, Admiral Wu Shengli, on numerous occasions to discuss areas of cooperation. In what ways can the United States further enhance mil-mil relations with the PLA?

We have to be clear about where we want to take the mil-mil relationship. China has seemed to be more inclined to prefer mil-mil for the sake of it. I believe we need to convene with our respective counterparts in the PLA and unambiguously determine where we want to take this relationship. Remove the politics and be pragmatic; tactical issues (e.g., incidents at sea and in the air) will occur—we should work through each theme.

Last year, Pacific Rim navies, led by Washington and Beijing, agreed to a Code for Unplanned Encounters at Sea (CUES), which included an air-to-air annex aimed at reducing dangerous intercepts. In light of the recent close of a Chinese J-11 aircraft and a U.S. surveillance plane, do you think the agreement is sufficient?

The agreement is sufficient—for the near term. I believe we should keep the agreement in place and show China we’re committed to it. We must train our people, and make sure our navies use CUES and all of its attributes. At the same time, we should continue to notify each other if we are not adhering to the code, follow up on instances of noncompliance, and insist on accountability. My experience was that a demonstrated and disciplined commitment made CUES effective.

In addition, we should expand CUES by integrating our respective coast guards—U.S. and Chinese—and then integrate the coast guards of other nations.

The revised U.S. maritime strategy calls for greater emphasis on the Asia-Pacific theater and enhanced interoperability with allied forces. Considering existing budgetary constraints, how can the United States continue engagement with key partners and provide reassurance of its commitments?

I believe that reassurance of commitments is best accomplished by being consistent and predictably present to our allies. We need to budget accordingly. Operations—fleet training operations, exercises with partners—are not a large part of the navy’s budget. For context, as a rule of thumb, owning forces (purchase and maintenance of ships and aircraft and investment in people) is 85% of the budget; operating and training forces is 15%. Reassurance is more policy than budget. We should be consistent in what we declare our priority to be.

There has been much recent attention on the United Nations Convention on the Law of the Sea (UNCLOS), which the United States has not yet ratified. What are your thoughts on this, and what is the way forward?

When there is enough interest among Senate leadership to bring UNCLOS ratification to a debate, a hearing, and a vote, then progress can be made. It is a matter of priority.

For decades, most service chiefs and chairmen of the Joint Chiefs have testified on the value and importance for the United States to be part of UNCLOS. Lack of membership is undermining U.S. policy that maritime disputes be resolved in accordance with this international agreement. Urging China to comply with the decisions and declarations of a treaty framework that the United States does not even participate in degrades U.S. international credibility in this area.

On July 12, an arbitral tribunal at the Permanent Court of Arbitration in The Hague ruled in the Philippines’ case against China on claims in the South China Sea. What are your initial thoughts on the ruling?

First, I thought the ruling was articulated well by the Permanent Court of Arbitration—the judges came to clear and concise conclusions. Second, it was important that a decision and declaration such as this was reached by a nonpartisan international body. Regarding maritime operations, my initial thoughts are that we should stay the current course—in terms of naval operations and interface. Further, we shouldn’t gloat but rather allow the situation to develop between the Philippines and China. Where does their relationship go from here? We should encourage a bilateral approach—diplomatic channels should be used to resolve differences, in adherence with applicable international norms. This presents an opportunity.

As CNO, you spearheaded efforts to incorporate more innovation and testing of high-tech programs, bringing advanced capabilities into the U.S. Navy’s arsenal and highlighting the importance of these capabilities. How will these changes affect the playing field in the Asia-Pacific and shape future U.S. military power in the region?

Overall, demonstrations help accelerate development at a lower cost because they introduce new technology earlier and determine its efficacy.

Finally, as the U.S. presidential election draws near, what are some key policies regarding Asian security that should be in a future administration’s strategy toward the region, particularly in the maritime domain?

We should expand our focus beyond the Asia-Pacific and develop a more comprehensive national security and defense strategy that includes the Indian Ocean. We need an Indo-Asia-Pacific strategy. It’s critical that we demonstrate commitment beyond the Middle East and that our priorities lie in the Indo-Pacific region. Second, this Indo-Asia-Pacific strategy needs to be clear and coherent—understandable in layman’s terms. Finally, we need to show commitment through adequate funding and delegation of authority to carry the strategy out.

Jessica Drun is a Bridge Award Fellow with the Political and Security Affairs group at NBR.