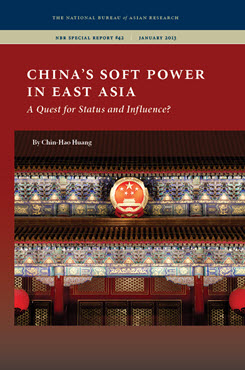 China's Soft Power in East Asia
A Quest for Status and Influence?

This report examines China’s use of soft power as a foreign policy tool and analyzes the strategic, economic, and political implications for U.S. policy in East Asia.

The practice of soft power has become an attractive policy option for China to help demonstrate its commitment to a “peaceful rise.” This has resulted in Beijing’s attempt to use an increasing array of foreign policy tools beyond material hard power in its interactions in East Asia, including development assistance, trade, and cultural exchanges. However, China’s massive push to project soft power has not directly translated into more supportive views of its quest for status and legitimacy. This limited appeal derives from (1) Beijing’s decision to demonstrate its resolve on regional territorial disputes with military coercion and (2) the lack of serious political reform in China. With respect to the latter, it will be increasingly difficult for the government to prevent its domestic record on political and civil freedoms from affecting China’s international credibility. As the new leadership charts its foreign policy priorities, it will have much to contemplate about why it remains so difficult to generate and sustain soft power commensurate with China’s remarkable economic might.