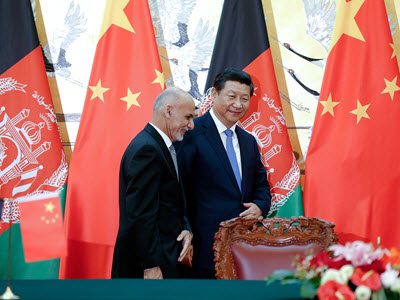 China has over time become Afghanistan’s largest investor and stepped up its involvement as a conflict mediator in greater Asia. As peace talks with the Taliban continue and the United States gradually draws down its troops in Afghanistan, NBR intern Aimée Tat interviewed outgoing Afghan Ambassador to China Janan Mosazai about what future role China might play in Afghan affairs.

As the United States makes a commitment to not only physically withdraw from Afghanistan but also leave the remaining two aspects of the peace process (the intra-Afghan dialogue and a comprehensive ceasefire) in the hands of Afghan stakeholders, how might China attempt to fill the gap to help ensure long-term peace?

Although the idea of a U.S. military withdrawal is on the table, it is too early to assume that the United States will also withdraw from Afghanistan politically and economically. In looking at the situation, there is a regional dimension of course, but there is also the international dimension. I think China and the United States, as global powers—and furthermore, with one being Afghanistan’s next-door neighbor and the other its foundational strategic partner—have important roles to play in both dimensions.

It is more useful to think of China’s future role as complementing the United States’ role rather than substituting for it. Thus far at least, our Chinese neighbor has not said that it is in any way prepared to replace the role that the United States has played in Afghanistan over the past eighteen years. Of course, our Chinese counterparts have always voiced strong support for peace, stability, and security in Afghanistan—goals that are very clearly also in China’s own interest. However, Afghanistan has not received the same type of support from China that the United States has traditionally provided. Although China’s role in Afghanistan continues to grow, especially in terms of investment, energy, and the capacity building of Afghan security forces, it is premature to talk about China replacing the role of the United States. At the same time, that does not discount the fact that China has an important role to play in a post-conflict Afghanistan.

The questions and discussions about a growing divergence and rivalry between China and the United States in Afghanistan can be misleading. There is so much that can bring these two countries together in support of not just the immediate goal of achieving peace and putting an end to the ongoing war but also Afghanistan’s future development and growth into a bridge between the Far East and Central, South, and West Asia.

How does Afghanistan see its role in the Belt and Road Initiative (BRI)? In what areas do Afghan interests align with Chinese interests?

Afghanistan has been an official partner of BRI since May 2016. The following year, the Afghan and Chinese presidents held substantive and concrete discussions on Afghanistan serving as a connector between two of the BRI corridors, namely the China-Pakistan Economic Corridor and the China–Central Asia–West Asia corridor. At the highest levels of leadership, Afghanistan sees itself as a gateway not only for BRI but for regional cooperation in general. Afghanistan will have to play a key role as a land bridge in the heart of Asia, as it is impractical to continue to go around the country. Instead, it is more efficient, faster, and more economic to connect the key subregions of Central, South, and West Asia through Afghanistan.

Afghan and Chinese interests align in many areas, most importantly economic growth and development and, of course, security. It is for the benefit of both countries, and all of their neighbors, that Afghanistan maintain peace, avoid extremism and terrorism, and continue to develop as an independent state. Only a secure, stable Afghanistan can become a regional partner and participate in the trade and exchange that will benefit China and the greater region.

China is not only interested in the future of Afghanistan because terrorism and violent extremism pose a threat to China’s internal security. It is also concerned that instability and insecurity in Afghanistan, in the event that peace is not achieved and security deteriorates, could emanate throughout the region and thus pose serious threats to Chinese interests outside China—interests that are growing exponentially.

In a 2018 interview with the Hoover Institution, you said that since 2001 the United States has maintained a strategic partnership based on common values with a “new democratic Afghanistan.” What is your perspective on China, a nondemocratic state, as a peacebuilder and strategic partner with Afghanistan? Do you see any points of friction?

I think China has made it very clear to the two successive Afghan governments in the past eighteen years that it has no interest in affecting the form of government that the Afghan people choose for themselves. Domestic politics, to a large extent, are irrelevant to the type of relationship Afghanistan and China have built together. In contrast to the relationship that Afghanistan has with the United States, Sino-Afghan cooperation is focused on much more immediate and tangible common interests within the realms of peace and security, economic development, investment, trade, and education. When it comes to the U.S.-Afghan partnership, of course, democracy and governance become much more significant because these are based on common shared values.

Generally speaking, Afghans have a very positive outlook on relations and cooperation with China because China has so far played a net positive role when it comes to support for Afghanistan. Going back to the 1950s, China was a very poor country, but it implemented a number of modest but useful projects in Afghanistan, particularly in the areas of irrigation and healthcare. The Afghan people and government still remember those projects. Despite there being some impatience with the pace and materialization of Chinese investment and development projects in Afghanistan, the overall attitude toward China remains positive.

In looking for a new strategic partner in a post-U.S. era, what could cause Afghanistan to pivot toward China and away from India, a long-term ally that is currently in direct competition with China for regional influence? What is Afghanistan’s strategy for negotiating relations with these two major states?

It would be detrimental to Afghanistan’s future to pivot away from any partner willing to invest in our country’s growth. I don’t see Afghanistan’s regional strategy as a dichotomy between China and India; it is in our best interest to cooperate with both countries and capitalize on any shared interests. Afghanistan’s partnerships are based on bilateral relationships and the capacity of each specific partner country. In this way, China and India can play different yet complementary roles in Afghanistan.

In my opinion, it would also be a mistake to interpret Sino-Indian competition in Afghanistan as adversarial. China’s rise as a regional and global power will have a major impact on regional and global dynamics; on that issue, there is no doubt. However, as China continues to grow in wealth, power, and political and diplomatic influence, the hope is that shared interests in Afghanistan will shape complementary competition with other great powers and deepen regional connectivity as well as regional economic integration among neighboring countries.

Afghanistan’s strategy, as described by President Ghani, is a strategy of partnership and cooperation with all of its neighbors. The specifics of these partnerships will vary from one country to another, as will Afghanistan’s priorities and those of its partners. Through such a strategy, Afghanistan seeks to ensure that its relations with one country do not pose a threat to its relations with other countries.

Janan Mosazai is the outgoing Afghan Ambassador to China (2016–18). Ambassador Mosazai’s comments on the state of Afghan affairs and foreign relations have been featured in various academic and media outlets, including the Hoover Institution, Stanford Law School, Al Jazeera, Reuters, and the Washington Post.

This interview was conducted by Aimée Tat, a Political and Security Affairs Intern at NBR. She previously worked with Rumi Consultancy in Kabul.