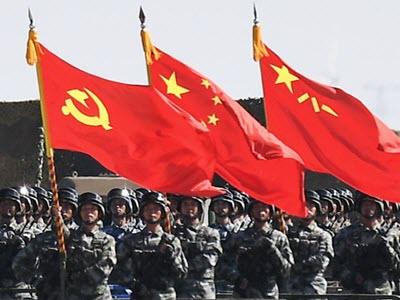 Chinese soldiers carry the flags of (L to R) the Communist Party, the state, and the People’s Liberation Army during a military parade at the Zhurihe training base in China’s northern Inner Mongolia region on July 30, 2017. China held a parade of its armed forces on July 30 to mark the 90th anniversary of the People’s Liberation Army (PLA) in a display of military might. / AFP PHOTO / STR / China OUT (Photo credit should read STR/AFP/Getty Images)