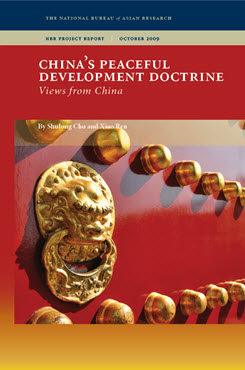 Two prominent Asia specialists offer their perspectives on China’s strategy toward its neighbors.

In 2009, NBR invited two renowned international relations experts from China to offer thoughts on the essays by Chellaney, Chung, and Thayer. Shulong Chu, professor of political science and international relations and deputy director of the Institute of Strategic and International Development Studies at Tsinghua University in Beijing, and Xiao Ren, professor, associate dean, and director of the Center for Chinese Foreign Policy Studies at the Institute for International Studies, Fudan University, share their critiques of the analysis and offer their own perspectives on China’s strategy toward its neighbors in the new report China’s Peaceful Development Doctrine.

In his essay “Assessing Regional Reactions to China’s ‘Peaceful Development’: A Chinese View,” Dr. Chu agrees that the rise of China presents both opportunities and challenges for the country’s neighbors, and organizes the perceived threats into three dimensions: economic competition, security concerns, and historical grievances. Though Dr. Chu does not completely agree with the emphasis the 2008 NBR Analysis authors place on these three dimensions, he does recognize the extent to which perceptions of the balance between opportunities versus challenges presented by China’s development varies significantly from state to state. He argues that the most significant factor shaping China’s peaceful development strategy and strategic approach to the region is largely ignored by the authors: the actions of the United States and the status of U.S. relations with the other actors in Asia.

In his essay “A Rising China sees itself in Asia’s Mirror,” Dr. Ren commends the authors for recognizing the multifaceted and complex relationship each of the highlighted countries shares with China as well as the degree to which these ties affect their view of China’s strategic intentions. But he is quick to caution that several of the assessments give too much weight to the downside risks and negative aspects of China’s increasing influence in the region and therefore come across as too pessimistic. He points out that the arguments do not adequately address the intentions behind China’s actions, and thus the authors may be overlooking some of the potential benefits for China’s neighbors resulting from China’s peaceful development strategy.

A Rising China sees itself in Asia’s Mirror
Xiao Ren