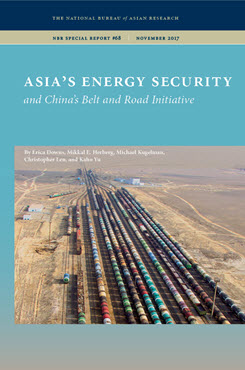 From NBR Special Report no. 68

This essay examines the interplay between the return of China’s national oil companies (NOCs) to international mergers and acquisitions and China’s Belt and Road Initiative (BRI).

This essay examines the interplay between the return of China’s national oil companies (NOCs) to international mergers and acquisitions and China’s Belt and Road Initiative (BRI).

China’s NOCs emerged as big buyers of international oil and natural gas assets in the mid-2000s and early 2010s before abruptly curtailing their overseas purchases in 2014–16. This sudden pause in their global acquisitions was largely the result of the collapse in crude oil prices and the targeting of the oil industry by President Xi Jinping’s anticorruption campaign. Now that crude prices have stabilized and Xi’s crackdown on corruption has moved beyond the oil industry, the NOCs are slowly returning to international mergers and acquisitions. However, this new phase of buying is likely to be characterized by fewer concerns about resource scarcity, more disciplined decision-making, and more partnerships with foreign firms. China’s NOCs will look for opportunities to capitalize on BRI to demonstrate that they are supportive of Xi’s signature foreign policy initiative. However, most, if not all, of their acquisitions are probably ones they would have made in the absence of this initiative.

Erica Downs is a Senior Research Scientist in the China Studies Division of CNA and a Nonresident Fellow at the Center on Global Energy Policy at Columbia University.

China’s National Oil Companies Return to the World Stage: Navigating Anticorruption, Low Oil Prices, and the Belt and Road Initiative
This site uses cookies. Please read our Privacy Policy to learn how and why we use cookies.