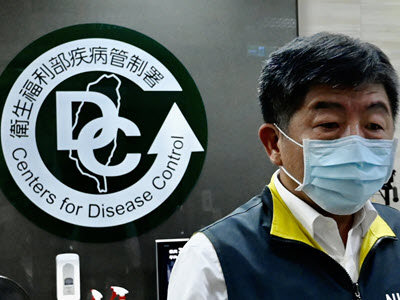 Chinese disinformation about the Covid-19 pandemic is a global issue. Much of the early disinformation regarding the novel virus targeted Taiwan, whose presidential election in January made it the focus of an aggressive Chinese campaign.

From January to mid-April 2020, Puma Shen, an assistant professor at the National Taipei University and the director of Doublethink Lab, archived 130,000 articles in China (including social media posts and news reports) containing the words 武漢 (Wuhan), the place where Covid-19 initially emerged, and 肺炎 (fei yan, pneumonia), a common disease suffered by those infected with Covid-19. Yen-Zhi Peng interviewed Dr. Shen about the early Chinese disinformation campaigns related to the virus and the impact on public health and national security in Taiwan.

During the initial Covid-19 outbreak, what kinds of disinformation gained traction in Taiwan? Is it possible to trace the source of these campaigns to identify how they spread?

There are four different kinds of Chinese disinformation related to Covid-19 in Taiwan: (1) Covid-19 is just a flu, (2) Covid-19 is much more serious in Taiwan than the media or government is reporting, (3) the Covid-19 virus came from the United States, and (4) China is helping the world. At the beginning of the outbreak, the disinformation that attracted the most attention was the false comparison of Covid-19 and the flu—the claim that Covid-19 is just like the seasonal flu, and we need not worry. This claim was spread through Weibo, content farms, and the official media in China, and was then distributed by political elites. For example, a Weibo post on January 16 shared a CNN report from January 10 about the “U.S. flu” and implied that the flu might be more deadly than Covid-19. Another early example of this disinformation is a news story from ifeng.com (Phoenix New Media), which is the fourth most popular web portal in China. The story shared a report from Beijing Evening News (an official Chinese newspaper) with the title “U.S. Has the Deadliest Flu Outbreak in Forty Years, 6,600 People Died.”

People are predisposed to believe this rumor since it would mean that no further steps need to be taken if the coronavirus is no worse than the seasonal flu. Articles such as these were widely shared in Taiwan during the initial outbreak in January, and even today some political elites around the world still promote this comparison.

This disinformation by the Chinese Communist Party intersects with its efforts to maintain social stability within China. Originally, the rumor was only in Chinese, and later it appeared in multiple languages. However, leaders around the world were influenced by this rumor and initially downplayed the severity of the virus, which led to the comparison between Covid-19 and influenza quickly spreading.

Are there any signs that tell us whether the sources of such disinformation are state operators, paid individuals, or state-blessed actors?

Many of the online sources are paid. The cyber force in China has its own community, and some government officials participate in the discussion, including operatives from the People’s Liberation Army and the Chinese cyber police. However, money is not a requirement for the spread of disinformation. CCP officials may simply ask overseas Chinese citizens to distribute disinformation or even try to influence people who have interests in China. For example, movie stars might be lured to contribute with the promise of their movie airing in the country. The decoupling of production and distribution has made it much easier to spread disinformation without being caught. For example, ethnic Chinese Malaysians and Taiwanese citizens were once relied on to spread disinformation produced by content farms, but it is now possible for the algorithms on Facebook or YouTube to easily target specific groups.

How does Taiwan counter the disinformation campaigns institutionally and in civil society?

The Central Epidemic Command Center (CECC) livestreamed press conferences every day from January to June, and has continued to do so every week since June 7, so that there is always one official source for public information. It is hard for Taiwanese people to not receive the messages from the CECC when the media livestreams and reports the press conference every day and people receive LINE messages from the CECC as well. LINE is the predominant instant-messaging app in Taiwan and currently has 21 million active users, accounting for nearly 90% of the country’s population. According to a poll conducted by TVBS Poll Center on May 17, 91% of respondents approved of the Tsai government’s response to the pandemic. A report from the Taiwanese Public Opinion Foundation on February 24 showed that Taiwan’s citizens graded the CECC’s performance 84 out of 100. Therefore, there is a high degree of trust in public officials in Taiwan, even those who identify with the opposition party.

Doublethink Lab exposes each piece of disinformation we find, while the Ministry of Justice Investigation Bureau and fact-checking organizations trace the origin of disinformation. Taiwan FactCheck Center and MyGoPen, the two fact-checkers certified by the International Fact-Checking Network, often post their reports on Facebook and LINE to clarify the rumors. However, locally produced disinformation still exists that could do harm to Taiwan’s democracy.

Only a small amount of disinformation is disseminated on PTT (a Taiwanese bulletin board system similar to Reddit). Dcard (a Taiwanese anonymous social media platform exclusively for college students and alumni) is also doing well in terms of curtailing disinformation content because it has a very robust process for setting up an account. Some people may sell their accounts, but Dcard works hard to track inauthentic behavior. Facebook is now the platform that blocks the most disinformation in Taiwan. The company has adopted a very strict standard for posting that limits articles from content farms, and it also collaborates with local NGOs to collect disinformation. By contrast, LINE is simply doing nothing. As a person-to-person platform, its capacity for oversight is limited due to privacy concerns. Twitter has done well in stopping disinformation, but it is not the main social media platform Taiwanese people use. The most popular platforms are LINE and Facebook. YouTube is actually the most affected platform right now, and its loose strategy for blocking disinformation is causing great harm to Taiwan and the rest of the world.

However, a major obstacle to containing disinformation is that if the distributors are local, those accounts are “authentic,” even if the owners have been bribed by China. The accounts are not run by bots but, rather, by human users, and it is impossible for the platforms to block them. I believe China is shifting its strategy this year by trying to find more and more local collaborators to spread disinformation. For example, China now asks a high number of Twitter users to spread false information—not by buying their accounts but by paying them money periodically. It also tries to bribe local YouTube users in Taiwan. China will definitely employ the same strategy around the world, just as it has paid some think tank scholars, professors, and political elites. The Propaganda Department and the United Front Work Department are collaborating now.

How do the Covid-19 disinformation campaigns affect Taiwan’s public health and national security? What can other countries learn from Taiwan?

Taiwan is not currently facing a national security threat as a result of Covid-19 disinformation. As discussed earlier, our government actually has its own information campaign to counter disinformation efforts, making it much more difficult for China to influence public opinion on the pandemic. Moreover, the pandemic is currently under control in Taiwan. Although there are persistent efforts by China to influence the Taiwanese people, their success rate is low right now.

China has shifted the focus of its cyber force from attacking Taiwan to attacking other countries more affected by the virus. What these countries should be aware of are the Chinese tactics used to confuse the public about the origin of the virus and promote the narrative that the Chinese model of governance is better than the Western one. The Global Engagement Center, housed under the U.S. State Department, for example, released a report in April on Russian, Chinese, and Iranian disinformation that Covid-19 was made by the United States and is spread by U.S. troops.

The main difference we see with the early tactics in Taiwan is that disinformation campaigns now use YouTube more and tend to evade scrutiny on Facebook by flooding the comment area. Some people think that China is also utilizing Twitter to influence the current presidential campaign in the United States. However, accounts from China seem to target the overseas Chinese population, interacting with a few people and seldom engaging in the wider online conversation. It is possible that China now primarily uses commercial accounts—rather than its own accounts—to spread disinformation to the U.S. public through sites such as YouTube or TikTok, given that it already applies these tactics in Taiwan. Recently, China also has begun to use AI to produce fake videos on YouTube imitating Taiwanese political talk shows. This is another new tactic that the United States should monitor.

Puma Shen is an Assistant Professor at the National Taipei University and the Director of Doublethink Lab, which tracks Chinese disinformation and influence networks in Taiwan.

This interview was conducted by Yen-Zhi Peng, an intern with the Political and Security Affairs group at NBR.