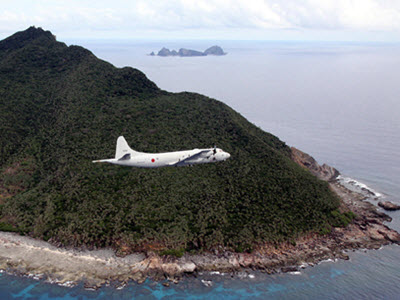 This photo taken on October 13, 2011, shows a P-3C patrol plane of Japanese Maritime Self-Defense Force flying over the disputed islets known as the Senkaku islands in Japan and Diaoyu islands in China, in the East China Sea. Japanese military and paramilitary planes have flown through China’s newly declared air zone without any resistance from Chinese jets, an official and a report said on November 28, 2013. (Japan Pool/AFP/Getty Images)