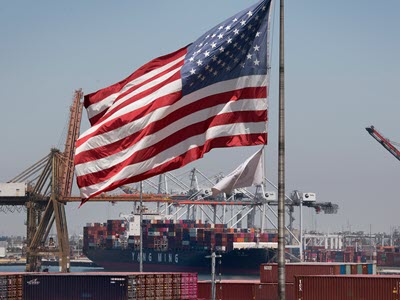 The US flag flies over a container ship unloading it’s cargo from Asia, at the Port of Long Beach, California on August 1, 2019. – President Donald Trump announced August 1 that he will hit China with punitive tariffs on another $300 billion in goods, escalating the trade war after accusing Beijing of reneging on more promises. (Photo by Mark RALSTON / AFP) (Photo by MARK RALSTON/AFP via Getty Images)