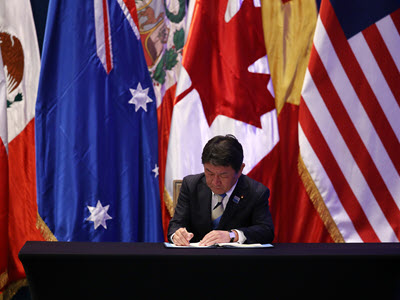 Saori N. Katada argues that Japan’s rule-making efforts in the area of trade and investment will become even more vital in the post-pandemic Indo-Pacific as U.S.-China economic tensions intensify and global supply chains face uncertainty.

In the 21st century, Japan has emerged as a leader in protecting the international liberal economic order. When trade multilateralism was under attack, not only did Japan manage to rescue the Trans-Pacific Partnership (TPP) agreement, but it also successfully concluded its Economic Partnership Agreement with the European Union and helped bring the Regional Comprehensive Economic Partnership (RCEP) negotiation into fruition. At the end of the day, 80% of the country’s trade is now covered by free trade agreements (FTAs) that are either in effect or concluded. This is quite a significant turn-around for Japan from having only a few agreements with small partner countries covering less than 20% of its trade just several years ago. Japan’s rule-making efforts in the area of trade and investment will become even more vital in the post-pandemic Indo-Pacific as U.S.-China economic tensions intensify and global supply chains face uncertainty.

Since the early 2010s, the Japanese government has become a proactive player in pushing the mega-FTA frontier forward. When the then new president Donald Trump withdrew the United States from the already-signed TPP in January 2017, the Japanese government played a central role in picking up the pieces and launched the TPP-11 negotiations. Japan hosted most of the subsequent meetings that led to the conclusion of the Comprehensive and Progressive Agreement for Trans-Pacific Partnership (CPTPP). With seven out of eleven governments having ratified the agreement, the CPTPP went into effect in December 2018.[1] Despite the reduced size due to the United States’ exit, its high-standard rules for trade and investment, including rules for e-commerce and a common set of intellectual property right protections, carry significant importance for the global trade regime. As for the RCEP, despite the departure of India from negotiations in 2019, this fifteen-member trade pact among economies in the western Pacific, including China, is the world’s largest FTA, covering 30% of global GDP. After its November 2020 conclusion, the RCEP is expected to go into effect in 2021.

For the economies in the Indo-Pacific, the importance of the CPTPP and the RCEP are manifold. First of all, both arrangements consolidate the noodle bowl of bilateral FTAs that dominated the region for the last twenty years. East Asia has thrived through the development of regional production networks with supply chains extending through many economies, and mega-FTAs have started to finally cover these networks comprehensively. The RCEP applies cumulative rules of origin, which allows products of one member country to be processed or added to products in another member as if they had originated in that second country. This system reinforces regional supply chains by allowing firms to easily move parts from one country to another. With only five current Asian members (Brunei, Japan, Malaysia, Singapore, and Vietnam), the CPTPP does not cover the region widely, but it contains an accession rule for new entrants so that the membership can expand. The post-Brexit United Kingdom has already requested such consideration, and several regional economies, from Thailand to China, have demonstrated their interest in joining the agreement.

Second, both the CPTPP and the RCEP can function as robust rule-setting institutions at a time when the World Trade Organization (WTO) is struggling to function properly as the anchor of the global multilateral trade order. The CPTPP provides 21st-century rules that expand and build onto the existing WTO provisions. The RCEP, which includes diverse economies and reflects China’s priorities, does not have a high level of investment protection (such as a provision banning requirements to transfer or provide access to software source code) or instruments to control the behavior of state-owned enterprises. Many of the rules, including tariff liberalization, also are phased in over a longer period. Nonetheless, RCEP members have agreed to establish a “brick and mortar” headquarters to support this agreement for the long term. The agreement itself will be reviewed and updated every five years, allowing for improvements in standards over time. There are also dynamics of competitive rule-setting in the Indo-Pacific, where major players in those mega-FTAs can become the agents to diffuse rules that support their economic goals.

Third, both agreements, along with the Japan-EU Economic Partnership Agreement, can serve as focal points of global open trade and create positive incentives for foreign investment to flow into the region in the post-pandemic world. Asia’s emerging and developing economies contracted by 1% in 2020, according to the International Monetary Fund.[2] Although this pandemic-caused economic contraction has not been as severe in East Asia as in other parts of the world, recovery will be further assisted by free and fair trade and investment, which will counter the possible post-crisis protectionist urge.

Despite the consolidation of FTAs in the Indo-Pacific, the deterioration of the open global trade and investment atmosphere in recent years is of concern. In addition to the U.S.-China trade war and economic decoupling that captured headlines during the Trump administration, anti-globalization is gaining momentum in the United States and Europe. China’s strong drive to gain a technological edge and enhance its domestic production prowess under the banner of “Made in China 2025” has heightened the sense that the country poses economic security challenges. Prominent examples are the anxiety over China’s telecom giant Huawei dominating 5G technology and over potential Chinese leadership in artificial intelligence. Now, the governments of both Japan and the United States are enhancing their protection against China’s exploitation of the open economic system and other cyber and technology challenges through tightening requirements for investment screening and working to overhaul export controls.

The Covid-19 pandemic has made this precarious world even more insecure. Supply chain disruption visibly surfaced first with the difficulty in procuring personal protective equipment and later with semiconductor shortages that began to impose limitations on the manufacturing of various products, including automobiles. The lockdown in China in early 2020 also created major bottlenecks in Japanese production facilities due to delayed component shipments.

In order to manage its supply chain resilience against overdependence on China, the Japanese government has so far disbursed $3.1 billion in support of Japanese firms to either re-shore production back to Japan or relocate supply chains to South and Southeast Asia.[3] Although this was an emergency measure taken at the outset of the pandemic, the increased concern over economic security is compromising Japan’s stance in support of liberal global trade order. More recently, the Biden administration also signed an executive order to support U.S. manufacturing and launched a comprehensive review of U.S. supply chains around sensitive items such as pharmaceutical products, critical minerals, semiconductors, and batteries. Thus, wary of China’s continuing weaponization of economic interdependence, as exemplified by its actions against Australia in the last year, Japan and the United States have both started to focus increasingly on their economic security measures.

Will (and can) Japan carry on with its vital role as a torchbearer of the liberal economic order in support of a free and open Indo-Pacific? Economic interdependence with secure trade and investment has been an important source of economic growth and stability on both sides of the Pacific. However, the region has entered into a decade where such interdependence is politicized and weaponized in the competition for the technological upper hand and supply chain dominance.

The region is facing simultaneous forces of economic integration and disintegration, and Japan is caught in the middle in this tumultuous time. Economic security concerns are bound to intensify, and measures required to tackle these challenges are often incompatible with fundamental tenets of the liberal economic order. After the hard work of putting in place these mega-FTAs around the world, the international community expects Japan to utilize these arrangements effectively to promote the stability and prosperity of the Indo-Pacific and beyond. Japan should not abandon its new role as a guardian of free trade and fair rules for the global economy, which has restored the country’s international prominence, this time with a very positive reputation. As an economy that has long prospered under the liberal economic order, this is Japan’s duty as well as its opportunity to shine.

Saori N. Katada is a Professor of International Relations at the University of Southern California. She is the author of Japan’s New Regional Reality: Geoeconomic Strategy in the Asia-Pacific (2020).

[1] The other four signatories have yet to ratify the agreement.

[3] Of these funds, $2.9 billon was allocated to re-shoring supply chain back to Japan and $0.2 billion to diversifying supply chains to South and Southeast Asia. Ministry of Economy, Trade and Industry (Japan), “Successful Applicants Selected for the Program for Promoting Investment in Japan to Strengthen Supply Chains,” November 20, 2020, https://www.meti.go.jp/english/press/2020/1120_001.html; and Japan External Trade Organization, “Kaigai sapurai chein tagenka shien jigyo” [Support Operations for the Diversification of Overseas Supply Chains], https://www.jetro.go.jp/services/supplychain.