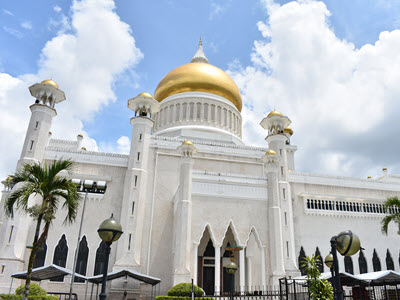 This Country Profile for Brunei is from the Maritime Awareness Project.

Brunei, located in Southeast Asia on the north-western coast of the island of Borneo, claims a 200-nautical mile (nm) exclusive economic zone (EEZ) that overlaps with China’s nine-dash line, as well as a 12-nm territorial sea and a continental shelf. Brunei asserts its maritime jurisdiction over these areas. Brunei appears to claim the one land feature within its EEZ, Louisa Reef, though different members of the government have made conflicting claims. Part of the Spratly Islands archipelago, Louisa Reef is also claimed by China, Taiwan, and Vietnam. Malaysia appears to have rescinded its claim to Louisa Reef. Brunei may also claim part of the area known as Rifleman Bank, which is fully submerged, as part of its extended continental shelf.

Brunei previously had a maritime boundary dispute with Malaysia, which surrounds it on three sides. This dispute was resolved amicably in 2009 after an exchange of letters. The letters, which have not been disclosed to the public, settled a number of sovereignty-related issues between the two neighboring nations: the delimitation of maritime boundaries, the establishment of a Commercial Arrangement Area (CAA) for oil and gas, and the delimitation of the territorial seas, the continental shelf, and the EEZs of both countries.

Brunei’s claims stem from its history as a British colony, which provides the basis for many of its maritime border demarcations. Upon independence in 1984, Brunei released a number of maps detailing its maritime claims, including its EEZ and its continental shelf.

A Ministry of Foreign Affairs official asserted Brunei’s claim to Louisa Reef in 1992. Regarding Rifleman Bank, the documents Brunei submitted to the Commission on the Limits of the Continental Shelf in 2009 request an extension to outer limit constraints and “full submission,” that includes Rifleman Bank (though that area is not explicitly mentioned by name).

For decades, Brunei had disputed its land border and maritime boundaries with Malaysia. Unclear maritime boundaries were a prominent problems particularly because Brunei’s economy is heavily dependent on exporting hydrocarbon resources. Due to incomplete delimitation in territorial waters, each nation awarded identical hydrocarbon exploration blocks in offshore sites to separate oil and gas companies. The oil and gas development effort was led on the Malaysian side by the U.S.-based Murphy Oil Corporation, and on the Brunei side by Royal Dutch Shell and France’s Total. The conflicting awards stalled development for nearly six years.

In 2009, however, the two country’s leaders came to settle the territorial issues through an exchange of letters. While the letters have not been made public, the bilateral issues settled in the agreement were summarized in a press statement released by Brunei’s Minister of Foreign Affairs:

“The solution of the maritime delimitation issue ensures certainty with regard to the delimitation of the territorial seas, the continental shelf and the Exclusive Economic Zone of both countries. The two countries would be able to enforce their rules and regulations and embark on new developments in their respective maritime zones.”

In the agreement, Brunei yielded to Malaysia some parts of its EEZ. Malaysia earned a right to develop Kikeh block, an offshore site that falls within Brunei’s EEZ and boasts estimated reserves of over 700 million barrels of oil. The exchange essentially resolved the dispute between Brunei and Malaysia, with Malaysia’s acquiescence to Brunei’s EEZ and claim to Louisa Reef.

Inconsistent statements by Brunei government officials illustrate the uncertainty of the country’s claims. In 1992, Foreign Minister Prince Mohamed Bolkiah told the Borneo Bulletin that Brunei only claims the waters around Louisa Reef and not the reef itself. The Ministry of Foreign Affairs, however, holds a separate view and asserts sovereignty over the feature.

Furthermore, Brunei has been cautious in asserting its territorial claim to Louisa Reef. The government has ordered that all maps indicating the country’s maritime claims in South China Sea be strictly reserved for official use. As a result, there is little evidence and few official remarks substantiating the conflicting interests between Brunei and China.

Brunei has not taken action to assert its territorial claim over Louisa Reef in recent years. After publishing a map in 1988 to announce the extent of its continental shelf claim, Brunei protested Malaysia’s claim to the reef in 1992. That same year, it protested Chinese maritime research in the area.

The waters surrounding Brunei are a rich site for natural resources. Hydrocarbon products extracted from the offshore blocks contribute a significant amount to the country’s economy. Brunei in 1972 became the first Asian country to export liquefied natural gas (LNG). It is currently the third-largest producer of natural gas in Southeast Asia and the fourth-largest LNG exporter in the world. According to the Asian Development Bank, the oil and gas sector accounts for approximately two-thirds of Brunei’s GDP, 95% of its export revenues, and 90% of its government revenues, underscoring the country’s overwhelming economic dependence on natural resources.