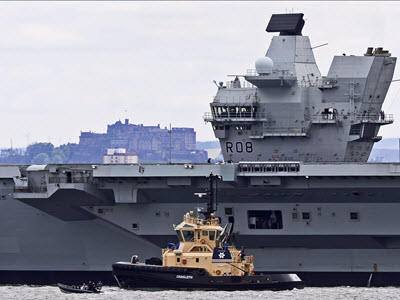 Ian Storey outlines three reasons that account for the increased presence of Britain’s Royal Navy in the Asia-Pacific over the past few years: Brexit, the 2015 Strategic Defence and Security Review’s identification of the erosion of the rules-based international order as one of the four main threats facing the country, and the United States’ call for other countries to do more to support freedom of navigation in the South China Sea.

According to several people familiar with the incident, on August 31, 2018, the 19,500-ton British amphibious transport vessel the HMS Albion did something in the South China Sea that no non-U.S. warship had done in living memory: it conducted a freedom of navigation operation (FONOP) by sailing through the territorial waters of the disputed Paracel Islands.[1]

Although Britain’s Ministry of Defence refused to either confirm or deny whether the HMS Albion had sailed within the 12 nautical mile territorial sea limit, China’s fury strongly suggested that the Royal Navy (RN) had indeed conducted a U.S.-style FONOP. Beijing chastised the United Kingdom for violating not only China’s sovereignty but also international law.[2] The fact that the British warship was en route to Vietnam—which contests China’s 1974 occupation of the Paracels—seems only to have added insult to injury.

The HMS Albion was one of five RN vessels deployed to Asian waters in 2018–19—the highest number since 2013. The warships undertook a variety of missions, including enforcing UN sanctions against North Korea; conducting naval drills with the United States, Japan, and Five Power Defence Arrangements (FPDA) allies (Malaysia, Singapore, Australia, and New Zealand); and exercising high-seas freedoms in the South China Sea and Taiwan Strait.

Three reasons account for the RN’s increased presence in the Asia-Pacific over the past few years. First, the UK’s 2015 Strategic Defence and Security Review (SDSR) identified the erosion of the rules-based international order as one of the four main threats facing the country (along with terrorism, the resurgence of state-based threats—particularly from Russia—and cyberattacks).[3] According to the SDSR, the Asia-Pacific exerts “considerable influence on the future and credibility” of the rules-based international order—hence the importance of the sanctions-enforcing operations against Pyongyang and presence missions in the South China Sea. The UK’s military disengagement from the conflicts in Afghanistan and Iraq prior to the release of the SDSR has allowed the RN to commit more naval assets to the Asia-Pacific.

The second reason is Brexit. Following the June 2016 referendum—in which 51.9% of those who voted opted to leave the European Union—the government articulated a post-Brexit vision for the UK under the slogan “Global Britain.”[4] In the security realm, Global Britain is about strengthening the country’s overseas defense networks, enhancing existing relationships, and supporting the rules-based international order. London considers freedom of navigation and overflight to be one of the central pillars of this order. After three years of political chaos and crisis, the UK left the EU on January 31, 2020.

Third, the UK’s closest ally, the United States, has called for other countries to do more to support freedom of navigation in the South China Sea.[5]

In mid-2018, the UK’s then defense secretary, Gavin Williamson, promised that the RN’s presence in Asia was not just a “flash in the pan” and that the government was committed to upholding freedom of navigation in the South China Sea.[6] In early 2019, he asserted that Global Britain required UK “action to oppose countries that flout the law” and “shore up the global system of rules and standards on which our security and prosperity depends.”[7] Williamson went on to reconfirm pledges made by his predecessors that in 2021 the maiden deployment of the RN’s newest and largest warship, the 65,000-tonne aircraft carrier the HMS Queen Elizabeth, would include the Pacific—presumably including the South China Sea.

Williamson also suggested that the UK was looking to establish a “permanent presence” in the Asia-Pacific. What form this presence might take is still under discussion in Whitehall. One option would be to forward-deploy an RN warship to the region on a rotational basis, as the UK has done in Bahrain. Suggested locations have included Singapore (where the RN maintains a logistics facility in support of the FPDA), Brunei (where the British Army has a Gurkha battalion), and even the U.S. naval base at Yokosuka, Japan. The latter suggestion is not as far-fetched as it might sound: The United States, Japan, and Britain have pledged to strengthen naval cooperation in support of the rules-based international order,[8] Washington might help shoulder some of the costs, and a British basing arrangement with the United States and Japan would avoid putting Southeast Asian countries in a difficult position, given that China would almost certainly be opposed to this plan (as would some members of ASEAN).

Following the Conservative Party’s re-election in December 2019, the government of Prime Minister Boris Johnson has not wavered in its commitment to a persistent presence in the Asia-Pacific. However, meeting the UK’s post-Brexit geopolitical ambitions will involve significant challenges.

The first set of challenges involves financial resources and the future of the RN. According to the Public Accounts Committee, the Ministry of Defence currently faces a funding shortfall of £7 billion ($9.2 billion).[9] As a result, the British press has been rife with rumors of impending defense cuts, including the possibility of mothballing or leasing one of the UK’s two new aircraft carriers. Moreover, the Johnson government has promised to conduct a “radical” new SDSR in 2020. Johnson’s chief adviser, Dominic Cummings (the mastermind behind the 2016 campaign to leave the EU), has been a fierce critic of “legacy platforms” such as aircraft carriers and has argued that the UK should instead spend more money on emerging technologies such as AI and robotics.[10] And looming over everything is the economic uncertainty of Brexit, especially if the UK and EU fail to agree on a trade deal by December 2020. If they do not reach an agreement, the British economy could take a hit, and this would negatively affect the defense budget, possibly limiting the RN’s ability to operate far from home.

Despite the rumors, the RN’s top brass fully expects to be operating two aircraft carrier battle groups by 2023 when the HMS Queen Elizabeth’s sister ship, the HMS Prince of Wales, becomes fully operational. But this too will pose challenges for the navy. Currently, the RN operates only nineteen major surface ships (six destroyers and thirteen frigates), and a two-carrier navy would absorb more than a third of these vessels for escort duties. That means the RN would be able to pack a bigger punch but that fewer warships would be available for individual missions (in the South China Sea and elsewhere).

Another problem that the RN faces is competing demands on its limited assets. Despite Britain’s ambition to play a greater role in Asia, its priority theater will remain the Euro-Atlantic (where it faces a resurgent Russia) followed by the Middle East. A crisis in either of those areas, or elsewhere, will limit Britain’s ability to deploy warships to Asia. A perfect example occurred in mid-2019: the HMS Defender was scheduled to deploy to the Asia-Pacific but was diverted to the Persian Gulf to escort British-flagged vessels following an uptick in tensions with Iran.[11]

The second challenge is China, and what kind of relationship London wants with Beijing after Brexit. The HMS Albion‘s FONOP clearly rankled the Chinese government. In April 2019, Vice Premier Hu Chunhua told Britain’s then finance minister, Philip Hammond, that the operation had led to a “pause” in Sino-British cooperation.[12] China has also been vexed by the UK’s support for the United States’ strong stance on freedom of navigation in the South China Sea. In September 2019, China’s ambassador to the UK, Liu Xiaoming, stated that Britain should not do the United States’ “dirty job” in the South China Sea, while the defense attaché, Major General Zhang Jianguo, warned, “If the U.S. and UK join hands in a challenge or violate the sovereignty and territorial integrity of China, that would be a hostile action.”[13] The HMS Queen Elizabeth is likely to embark with both British and U.S. F-35B fighter aircraft on its first mission to the Asia-Pacific in 2021.

Together with the UK’s criticism of Beijing’s policies in Hong Kong and Xinjiang, the South China Sea could frustrate the Johnson government’s desire to negotiate a post-Brexit free trade agreement (FTA) with China. China’s state-run press has already suggested that a Sino-British FTA could be derailed if the UK continues to “violate” China’s sovereignty in the South China Sea.[14] As such, London could face a dilemma in the very near future: whether to continue the operational tempo of its naval activities in the South China Sea—and thus provoke Beijing’s ire and possibly lose a vital trade deal—or, as other countries have done, to downplay the dispute in pursuit of economic gains.

Ian Storey is Senior Fellow and Editor of Contemporary Southeast Asia at the ISEAS-Yusof Ishak Institute in Singapore.

Image source: © Ken Jack/Getty Images. The Royal Navy aircraft carrier HMS Queen Elizabeth sails from the Forth Estuary with Edinburgh Castle in the background following a period of planned maintenance.