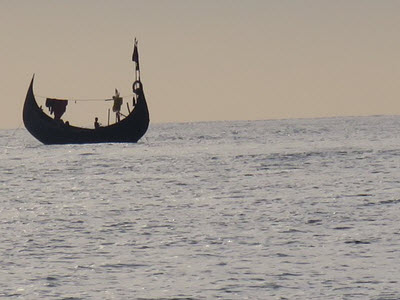 Ambassador Tariq Karim points out that as commercial and development activities continue to grow, responsible management of the Bay of Bengal will need to be prioritized to ensure sustained prosperity in the region and globally. He explains why Bangladesh is uniquely positioned to take on a bridging role among the littoral states.

A revival of the Indian Ocean’s historical role as a key transit route between the Atlantic and Pacific Oceans raises the strategic importance of the Bay of Bengal as both a potential gateway and a chokepoint for economic development of the broader Asian region. Located at the northeastern tip of the Indian Ocean, the bay is bounded by the coastlines of Bangladesh, India, Indonesia, Malaysia, Myanmar, Sri Lanka, and Thailand.

With a combined population of 1.7 billion and sustained GDP growth currently of $3 trillion,[1] the Bay of Bengal depends on the ability of states to enhance subregional cooperation. A quarter of the world’s traded goods cross the bay, including huge volumes of Persian Gulf oil and liquefied natural gas, providing energy-scarce countries with a corridor to securing resources.[2] The Bay of Bengal itself contains vast untapped natural resources of oil, gas, mineral ores, and fishing stocks, promoting investment and economic interest from India, China, and Japan.[3] As a result, it has the potential both to positively contribute to the economies of littoral states and to serve as a point of contestation among larger competing powers.

However, the benefits of increased economic activity will very likely be challenged and limited by the area’s growing ecological vulnerability. Dangers to the Bay of Bengal ecosystem are only now beginning to be understood, and prolonged environmental damage from the rising traffic of global commerce could increasingly erode economic and political stability in the region. The scaling risk from emerging ecological threats calls for a re-envisioning of management of the Bay of Bengal with an emphasis on collective action. This has opened a potential new role for Bangladesh to collaborate with other littorals to ensure that the region will collectively reap the full benefits of economic activity.

FORGING A BAY OF BENGAL COMMUNITY

Given its transboundary nature, environmental damage to the Bay of Bengal cannot be mitigated by a single country and will require mitigation through collective action. However, power dynamics in the existing relationships among countries in the South Asian Association for Regional Cooperation (SAARC) and the Bay of Bengal Initiative for Multi-Sectoral Technical and Economic Cooperation (BIMSTEC) complicate the process of forging effective regional collaboration.[4] The relatively newfound sovereignty of these states, together with the political baggage that has persisted since decolonization and subsequent partition, has created uncertainties in how countries should proceed in adopting a collective management strategy for addressing challenges in the Bay of Bengal.

Adopting a “BIMSTEC plus” model by including Indonesia and Malaysia into the Bay of Bengal community would create new possibilities for a balance of power among stakeholders. Their addition to the management of the subregion may foster an environment of increased confidence and collaboration among the current BIMSTEC members. In the past when other countries in the Association of Southeast Asian Nations (ASEAN) expressed concerns with Indonesia holding too much power in the region, Indonesian policymakers were willing to step back in order to yield space to concerned parties. Including major Southeast Asian littoral states with previous experience in establishing a new regional organization could help overcome the present concerns of ceding sovereignty in South Asia.

As a starting point, the threat from emerging ecological burdens, as opposed to other more politically divisive challenges, would be the ideal place to begin building a framework for subregional cooperation. Three major ecological risks in particular present immediate need for collective action: accumulation of plastic waste, existence of dead zones, and destruction of mangrove forests.

Accumulation of plastic waste. The unique characteristics of the southern Indian Ocean—the Asian monsoon season and the strength of southeast trade winds exceeding the trade winds of the Pacific and Atlantic Oceans—all combine to push floating plastic material farther to the west.[5] Plastic waste is steadily accumulating in the Bay of Bengal due to movement from the southern Indian Ocean northward and continuous drainage from several major eastern Himalayan rivers.[6] The collection of waste will grow to alarming proportions if no actions are taken and will contribute to the formation of “plastic soup” in the bay as well as perhaps aggravating existing dead zones and other ecological challenges.

Existence of dead zones. The dead zone discovered in the Bay of Bengal spans 60,000 square kilometers occupying water depths of 100–400 meters.[7] This directly affects available fish stocks in the area by depleting the habitable ecosystem of fisheries. Of the nearly 200 million people living along the coastlines, a majority are either partially or wholly dependent on the bay’s fisheries.[8] On a global scale, the dead zone in the Bay of Bengal has the potential of disrupting the global nitrogen cycle. Worsening conditions in the dead zone would trigger a drain of nitrogen—a key nutrient for life—in the planet’s oceans.[9]

Destruction of mangrove forests. Significant loss of mangrove forests is being recorded in South and Southeast Asia. In Myanmar, mangroves were once extensive, but are now reduced to the Rakhine State, Irrawaddy Delta, and Tanintharyi State.[10] The forest belt along the Arakan coast near Bangladesh has been vastly reduced as a result of industrial and agricultural runoff and conversion of forests into land for commodity cash crops.[11] Mangroves have traditionally served as a protective wall against severe weather for littoral states. As climate change continues to intensify storms globally, further recession of the natural protective barrier will leave littoral states vulnerable to the destructive capacity of such storms.

THE ROLE FOR BANGLADESH

As commercial and development activities continue to grow, responsible management of the Bay of Bengal will need to be prioritized to ensure sustained prosperity in the region and globally. Bangladesh is uniquely positioned to take on a bridging role among the littoral states with the introduction of a “BIMSTEC plus” model. Its role in the formation of SAARC and driving role in both the Bangladesh, Bhutan, India, Nepal (BBIN) Initiative and BIMSTEC provide historical examples of how the country has successfully collaborated with regional actors in the past. This expertise, coupled with healthy bilateral relations with India and China and an ability to punch above its weight in terms of economic productivity and regional diplomacy, suggests that Bangladesh may take on a leading role in setting a new BIMSTEC-plus orientation for future management of the Bay of Bengal. It is imperative that the littoral states come to the same realization seen in Europe after World War II that led to the formation of the European Union. Despite the political gridlock among current Bay of Bengal managers, cooperation ensures self-preservation and an improved quality of life for all in the region.

Tariq Karim was High Commissioner of Bangladesh to India with the rank and status of a minister of state from August 2009 to October 2014. Since November 2014, Ambassador Karim has been advising the World Bank on its South Asian Regional Integration Programme, focusing on encouraging economic and ecological integration through engaging in consensus-building dialogue.

[5] Mirjam van der Mheen et. al., “There’s No ‘Garbage Patch’ in the Southern Indian Ocean, So Where Does All the Rubbish Go?” Conversation, April 15, 2019, http://theconversation.com/theres-no-garbage-patch-in-the-southern-indian-ocean-so-where-does-all-the-rubbish-go-114439.