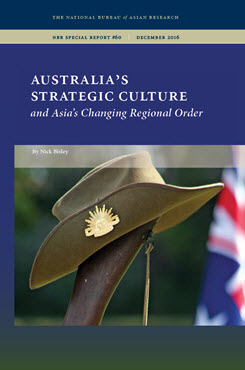 This report examines the mix of anxiety and dependence that drives Australian strategic culture and assesses how it shapes Australian policy.

Military power plays a central role in Australia’s international policy. Even though the country has excellent natural defenses and faces no meaningful geopolitical threat now or in the foreseeable future, support for this position remains strong across the political divide and among the public. As a thinly populated island-continent first established as an outpost of imperial Britain, Australia has a deep sense of vulnerability in its strategic outlook. The strategic culture is shaped by the interplay of anxiety and dependence. Australia has a highly capable military force that is able to defend core interests as well as serve as a means to ensure the support of its ally, the United States, given the perceived vulnerabilities of a country unable to defend its core interests alone. Yet although support for current strategic policy is solid, the narrowness of the strategic policy elite, along with shifts in public opinion, gaps opening up between business interests and security policy, and political disinterest in strategic policy, means that Australian strategic policy cannot be assumed to remain as it is indefinitely.

Nick Bisley is Executive Director of La Trobe Asia and Professor of International Relations at La Trobe University in Australia, where his research focuses on Asia’s international relations, great-power politics, and Australian foreign and defense policy.