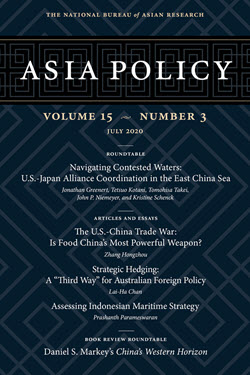 This essay examines the evolution of Indonesia’s maritime strategy—in particular, the approach adopted under President Joko “Jokowi” Widodo known as the Global Maritime Fulcrum (GMF)—and assesses the implications for the country’s strategic thinking in the future.

Though the GMF is a key inflection point in the evolution of Indonesian maritime strategy and made some progress during Jokowi’s first term, several key opportunities were not realized and the strategy faced severe shortcomings in the way it was defined, messaged, resourced, coordinated, and institutionalized. To fully achieve the potential of Indonesia’s maritime strategy, the Indonesian government will have to take a series of measures at home and abroad, both on its own and in concert with other regional and global actors, to address lingering challenges and seize new opportunities during Jokowi’s second term and beyond. Using interviews with key figures, primary and secondary sources, and an original analytical framework, this essay comprehensively assesses Indonesia’s maritime strategy under Jokowi and specifies ways in which the government can manage existing challenges and further advance its maritime strategy in the Indo-Pacific region over the coming years.

Prashanth Parameswaran is a Fellow with the Asia Program at the Woodrow Wilson International Center for Scholars in Washington, D.C. (United States). He holds an MA and PhD in international affairs from Tufts University.