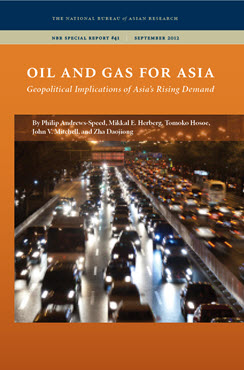 This essay examines key changes in global trade and investment in oil within an energy security context and outlines implications for the security of global supplies and the U.S.

This essay examines key changes in global trade and investment in oil within an energy security context and outlines implications for the security of global supplies and the U.S.

U.S. energy security is a mixture of rhetoric, support for market-based international and domestic solutions, and the capacity to intervene militarily to protect sources of supply to the international markets when normal trade breaks down. The rough self-sufficiency now foreseen for U.S. gas supplies is not replicated for oil. Although the U.S. is expected to be less dependent on oil imports in coming years, it cannot isolate itself from the security problems of the global oil market that affect its trading partners. Most importantly, the global oil balance is changing. Asian dependence on the Middle East is replacing U.S. and European dependence as the key question in global energy security. Asian companies also compete with U.S. and European buyers and investors for imports from exporters who are logistically more or less equidistant from them. These new “swing” suppliers are eastern Siberia, Kazakhstan, northern Iraq, and the exporting countries of the middle and south Atlantic: Nigeria, Angola, and Brazil. The governments who control the resources of these countries seek investment and markets to diversify their economies. Because of their state ownership, many Asian importing companies can respond by deploying support from other state-controlled companies and financial institutions for non-oil developments.

Given this changing global oil balance, the U.S. must prioritize the following policy objectives: