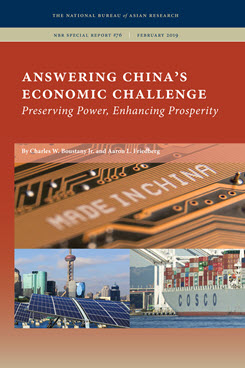 This initial report of the Taskforce on Transforming the Economic Dimension of U.S. China Strategy examines the origins, evolution, and troubling implications of China’s “mercantilist Leninist” economic policies; considers how the U.S. should define its objectives in responding to this challenge; and explores the prospects for negotiating a satisfactory settlement to the current trade standoff.

The U.S. and China have reached a turning point in their economic relations and are currently locked in a serious trade skirmish, if not yet a full-blown trade war. Negotiations are ongoing, but the possibility of reaching an agreement that will offer a satisfactory long-term outcome for the U.S. is far from clear. China’s strategy has been to engage economically with the world while resisting pressure to transform its political system and economic policies. China’s leaders view economic policy as an instrument for achieving their grand strategic objectives of preserving the Chinese Communist Party’s monopoly on domestic political power and restoring the country to its historic position as the preponderant power in eastern Eurasia and, eventually, the world. Today’s controversies over trade, investment, and technology are thus only one part of a much larger rivalry between competing systems and worldviews, and the current standoff over tariffs is only the first skirmish in what seems certain to be a protracted and difficult campaign.

U.S. policy for managing the current standoff with China should include the following elements:

Charles W. Boustany Jr. is a Counselor at the National Bureau of Asian Research. He is Co-chair and a Principal Investigator of the Taskforce on Transforming the Economic Dimension of U.S. China Strategy.

Aaron L. Friedberg is Professor of Politics and International Affairs at Princeton University. He is Co-chair and a Principal Investigator of the Taskforce on Transforming the Economic Dimension of U.S. China Strategy.