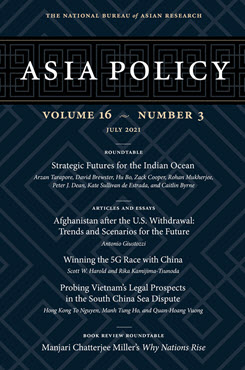 Afghanistan after the U.S. Withdrawal
Trends and Scenarios for the Future

This essay discusses the prospects for Afghanistan after the completion of the U.S. forces withdrawal and assesses that a relatively wide range of outcomes remain possible.

Neither the Taliban’s leadership nor any of their regional sponsors aim for the re-establishment of a Taliban autocracy. However, the deadlock in intra-Afghan talks raises the possibility of that happening by default, especially if the Taliban gain such a military edge that a balanced negotiated outcome becomes impossible. A Taliban military campaign could increasingly weaken the Taliban’s willingness to make concessions, whether to the government of the Islamic Republic of Afghanistan or to individual factions of the political elite in Kabul. In that scenario, two outcomes are possible: a de facto Taliban autocracy, in which fragments of the old political elite could be co-opted in a marginal, window-dressing role; or state collapse, in which the Taliban would not be able to assert order over the chaos created by the defeat of the republic.

Antonio Giustozzi is a Visiting Professor at King’s College London and a Fellow at the Royal United Services Institute (United Kingdom). His research interests include Afghanistan, Pakistan, insurgencies, state security reform, and state-building. He is the author or editor of eleven books, the most recent being The Taliban at War (2019).