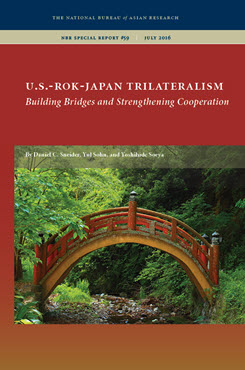 From NBR Special Report no. 59

This essay analyzes the U.S.-Japan-ROK trilateral relationship from a U.S. perspective and highlights the critical role that the U.S. has played in mediating tensions between South Korea and Japan.

The prospects for trilateral cooperation in Northeast Asia between the U.S. and its two principal security allies in the region, Japan and the ROK, have dramatically improved in the last year. In December 2015, the two governments reached a historic agreement to settle one of the most sensitive issues arising out of the wartime past: the treatment of Korean women coerced into sexual service by the Japanese Imperial Army, the so-called “comfort women.” Driven by North Korea’s unchecked pursuit of nuclear weapons and ballistic missile delivery systems, as well as by China’s aggressive actions in the South China Sea, all three countries now have a greater sense of shared security perceptions. The progress made on trilateral cooperation required considerable political leadership on all sides, most of all from Japan and the ROK, but also from U.S. officials. Although the U.S. has historically sought trilateral cooperation, it has been reluctant to intervene in the difficult relationship between Japan and South Korea. In the past, however, progress has depended on the U.S. performing a mediating role, and that was also true in the case of the recent steps forward. The U.S. needs to sustain its leadership role to ensure that trilateral cooperation is strengthened and solidified.

Daniel C. Sneider is the Associate Director for Research at the Walter H. Shorenstein Asia-Pacific Research Center at Stanford University.