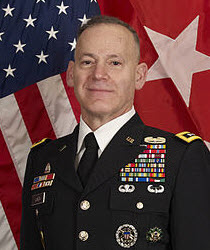 Stephen Raymond Lanza is a member of the Board of Advisors at the National Bureau of Asian Research.

He retired as a United States Army lieutenant general. He served as commanding general, I Corps at Joint Base Lewis–McChord, from February 2014 to April 2017. I Corps, with 53,000 troops, is prepared to lead joint and combined forces in full spectrum operations in the Asia-Pacific.

General Lanza was commissioned into the Field Artillery after graduating from the United States Military Academy at West Point. He is a graduate of the United States Army Command and General Staff College and the School for Advanced Military Studies at Fort Leavenworth, Kansas. He has a bachelor of science degree from the United States Military Academy, a Master of Science in Administration from Central Michigan University and a Master of Science in National Security and Strategic Studies from the National War College at Fort Lesley J. McNair, Washington D.C. He has also served as a National Security Fellow at Massachusetts Institute of Technology, Cambridge, Massachusetts.