Professor Robert A. Scalapino was a great friend of NBR, a longtime member of our Board of Advisors, and the inspiration for the National Asia Research Program (NARP).

Bob was involved with NBR from our founding and deeply supported our mission to bridge academics and policymakers on issues of greatest importance to U.S. interests in the Asia-Pacific. Bob’s career and lifework mirrored this mission. Long before he was “Dean” of Asian studies, he led the development of important, Asia-related institutions in the United States. He gently pushed senior U.S. policymakers to value the U.S.-Asia relationship in a meaningful and strategic way while personally travelling to the region hundreds of times and forming deep relationships there.

Teaching at the University of California, Berkeley, from 1949 to 1990, he instilled a belief in the importance of the Asia-Pacific in thousands of minds, many of whom became important policy leaders in their own right, both in the United States and abroad. Not only was Bob an inspiring leader and teacher, he also was a prolific writer. He authored 39 books and over 500 journal articles, including numerous NBR works, which have revolutionized the way the United States engages with its Pacific allies.

While Bob will be greatly missed at NBR and worldwide, his legacy continues. In 2010, NBR and the Woodrow Wilson International Center for Scholars partnered to organize the NARP, a major research and conference program designed to reinvigorate and advance the policy-relevant study of Asia. At its heart is the awarding of the Scalapino Prize to a leading scholar, named in recognition of Bob’s exceptional contributions to the field of Asia studies.

The first prizewinner, David M. Lampton, has said of Bob, “He certainly has been a …considerable force, pushing in constructive and appropriate directions, all the while trying to educate Americans and policymakers about the dynamics and challenges of this critical region…. I am very proud to have something [the prize] that bears his name.”

We honor Bob’s extraordinary life and offer our heartfelt condolences to the Scalapino family. As one of his students, I know how special he was and how badly we need Asia specialists in his extraordinary mold to lead us through the challenging times ahead.

Access audio from the Scalapino Prize reception, at which scholars in the field of Asian studies shared their stories about working with Dr. Scalapino. 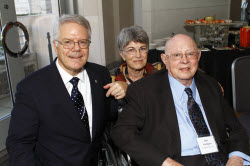 Robert A. Scalapino with David M. and Susan Lampton. 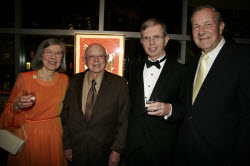