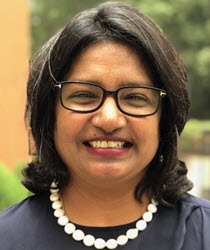 Dr. Rajeswari (Raji) Pillai Rajagopalan is the Director of the Centre for Security, Strategy & Technology (CSST) at the Observer Research Foundation, New Delhi. She is also a member of the National Bureau of Asian Research’s Board of Advisors. Dr. Rajagopalan was the Technical Advisor to the United Nations Group of Governmental Experts (GGE) on Prevention of Arms Race in Outer Space (PAROS) (July 2018-July 2019). She was also a Non-Resident Indo-Pacific Fellow at the Perth USAsia Centre from April-December 2020. As a senior Asia defence writer for The Diplomat, she writes a weekly column on Asian strategic issues. Dr. Rajagopalan joined ORF after a five-year stint at the National Security Council Secretariat (2003-2007), Government of India, where she was an Assistant Director. Prior to joining the NSCS, she was Research Officer at the Institute of Defence Studies and Analyses, New Delhi. She was also a Visiting Professor at the Graduate Institute of International Politics, National Chung Hsing University, Taiwan in 2012.

Dr. Rajagopalan has authored or edited nine books including Global Nuclear Security: Moving Beyond the NSS (2018), Space Policy 2.0 (2017), Nuclear Security in India (2015), Clashing Titans: Military Strategy and Insecurity among Asian Great Powers (2012), The Dragon’s Fire: Chinese Military Strategy and Its Implications for Asia (2009). She has published research essays in edited volumes, and in peer reviewed journals such as India Review, Strategic Studies Quarterly, Air and Space Power Journal, International Journal of Nuclear Law and Strategic Analysis. She has also contributed essays to newspapers such as The Washington Post, The Wall Street Journal, Times of India, and The Economic Times. She has been invited to speak at international fora including the United Nations Disarmament Forum (New York), the UN Committee on the Peaceful Uses of Outer Space (COPUOS) (Vienna), Conference on Disarmament (Geneva), ASEAN Regional Forum (ARF) and the European Union.