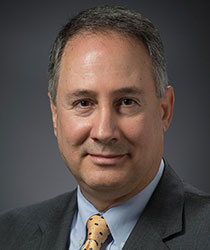 Mitchell “Mitch” B. Waldman is Principal of M Barnet Advisors LLC, providing strategic and advisory services to clients in the aerospace and defense sector. He retired in summer 2021 as executive vice president of government and customer relations and management team member for Huntington Ingalls Industries, America’s largest military shipbuilding company and a provider of professional services to partners in government and industry.

Serving in that capacity since 2011, Waldman was responsible for leading Huntington Ingalls Industries’ engagement with the Executive Branch, Legislative Branch, business and trade associations, think-tanks, and academic institutions. He also led the corporation’s independent research and development program.

From 2009 to 2011, Waldman served as vice president, business development of advanced programs and technology, for Northrop Grumman’s Aerospace Systems sector. In this capacity, he was responsible for shaping future architecture, advanced concepts and competitive opportunities for manned and unmanned aircraft, space systems and directed energy systems. Prior to this position, he served as Northrop Grumman’s corporate director for acquisition policy, responsible for coordinating the company’s efforts related to pending and upcoming acquisition regulations and policy at the U.S. Department of Defense and other government agencies.

Before joining Northrop Grumman, Waldman served as national security advisor for former Senate Majority Leader Trent Lott and as a national security consultant to the office of the Senate Majority Leader. Previously, Waldman served in several executive positions for the U.S. Navy, including deputy assistant secretary of the Navy (SHIPS), director of cost engineering and industrial analysis for Naval Sea Systems Command, and deputy program manager for Amphibious Warfare Programs.

Waldman earned a bachelor’s degree in mechanical engineering from the University of Florida and a Juris Doctor degree from Catholic University. He is also a graduate of Yale University’s Executive Management Program and the Defense Systems Management College Program Managers course. He’s been honored with the U.S. Navy Distinguished Civilian Service Award, the State of Mississippi Distinguished Civilian Service Award and the D.C. City Council of Engineering Societies Architect of the Year award.

He serves on the board of directors for the Naval War College Foundation, Armed Services YMCA, Naval Aviation Museum Foundation, and the National Bureau of Asian Research. He also chairs the Engineering Advisory Board for the University of Florida’s department of mechanical and aerospace engineering and is a member of the Dean’s Advisory Board for the University of Florida college of engineering.