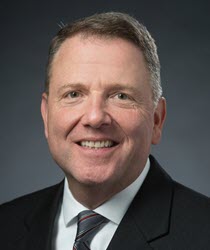 Tofalo graduated from the U.S. Naval Academy in 1983 and served 35 years in the Navy, retiring as a Vice Admiral. A career submariner, he has commanded at numerous levels, including submarine, squadron, group and force. His culminating submarine Flag Officer assignments were as Director, Undersea Warfare, responsible for submarine force warfighting requirements and the budgets to achieve them, and as Commander, Submarine Forces, responsible for the submarine force’s vision, policies and operations.