On behalf of the Board of Directors and staff of The National Bureau of Asian Research, we are deeply, deeply saddened at the death of longtime NBR Director and former Chairman of the Joint Chiefs of Staff General John M. Shalikashvili.

General Shali joined NBR’s Board in 1998 following an introduction from Congressman Norm Dicks. He immediately began working with our leadership team, including then-Chairman George Russell, our founding president Kenneth Pyle, and board members like Robert Zoellick and Jon Huntsman to guide and strengthen NBR’s work on national security issues.

Among his numerous contributions to NBR were his critical role in helping to establish the Strategic Asia Program, to which he served as Senior Advisor, his quiet efforts to help start the Pacific Health Summit, and his guidance as NBR engaged the U.S. national security community.

In recognition of his 39 years of military service to the United States and his years of extraordinary leadership to NBR, in 2006 we established the John M. Shalikashvili Chair in National Security Studies in order to advance the study of national security issues and address critical U.S. interests in Asia. The first chair-holder, Admiral Dennis Blair, who subsequently served as Director of National Intelligence, called General Shali “a great American.” The current chair-holder, Admiral Thomas Fargo, described him as a “great and unique American patriot.” General Shali’s life is a tremendous American story, an immigrant who started at the bottom and ended up the free world’s top imlitary officer.

We honor General Shali’s extraordinary leadership and service, and at this difficult time extend our heartfelt condolences to his wife Joan, his son Brant, and their family. 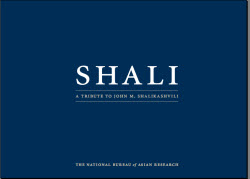 “A Tribute to John M.Shalikashvili” (PDF)
from the April 2006 Strategic Asia Forum and Gala 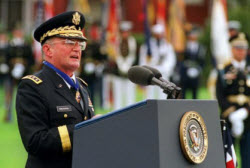 John and Joan Shalikashvili at a parade—Nuremberg, 1985 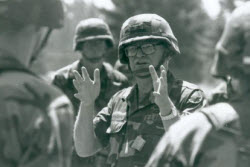