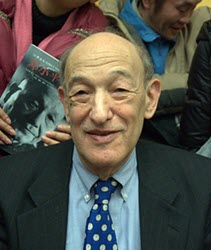 I am truly saddened by the passing of Ezra Vogel. He was so helpful and encouraging to me over the years that I referred to him as my patron saint. He said it would be better to call him aniki (elder brother) which I often did. I knew him as that rare human being, utterly without guile. We’ve lost one of the great Asianists.

Although I never studied under Ezra—there being enough to do in the Sanskrit department—I learned a great deal from him later in life. He was the national intelligence officer for East Asia for a time while I was deputy chief of mission in Beijing, and we used to see each other quite regularly. Washington didn’t suit him, but he never held a grudge. Where I really came to know Ezra was some years later, by when I had left the Foreign Service but was still living in Beijing, working for an international law firm. Ezra would stay in my back bedroom for weeks at a time, whilst he was researching his Deng book through conversations with Deng’s relatives and associates. Ezra and I would do our story decanting over breakfast, as he usually returned to my flat too late at night, after bright-eyed Athena had cast sweet sleep over my addled brain. As a superannuated diplomat with no academic credentials, I felt immensely honored to be having such exchanges, of equals in a sense, with such a scholar.

I never lost my respect for his erudition, his insights, and his fundamental human goodness and affection. He was, as the Sanskrit has it, a great pandit who leaves a legacy and a legion of disciples.

Professor Vogel contributed an essay to a roundtable in the inaugural issue of Asia Policy discussing the mission of the journal to bridge the gap between academic research and policymaking.