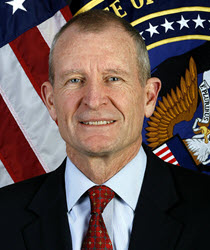 Admiral Dennis C. Blair is a member of NBR’s Advisory Board. Admiral Blair is the Knott Professor of the Practice at the University of North Carolina. He previously served as Director of National Intelligence from January 2009 to May 2010. He led sixteen national intelligence agencies, administering a budget of $50 billion and providing integrated intelligence support to the president, Congress, and operations in the field. Prior to this appointment, he held the John M. Shalikashvili Chair in National Security Studies with the National Bureau of Asian Research (NBR) and served as Deputy Director of the Project for National Security Reform.

Before retiring from the Navy in 2002, Admiral Blair served as Commander in Chief of U.S. Pacific Command, the largest of the combatant commands. During his 34-year Navy career, he served on guided missile destroyers in both the Atlantic and Pacific fleets and commanded the Kitty Hawk Battle Group. Ashore, he served as Director of the Joint Staff and held budget and policy positions on the National Security Council and several major Navy staffs.

Admiral Blair is active as a director and advisor to many organizations globally. He is an advisor to NBR’s Pacific Energy Summit and has served as Summit Co-Chair since 2011. He also serves as Co-Chair of the Commission on the Theft of American Intellectual Property, which released the findings of its work in a major report in May 2013. He is a Distinguished Senior Fellow (Non-Resident) at Sasakawa Peace Foundation USA and a member of the Energy Security Leadership Council of Securing America’s Future Energy, the Aspen Homeland Security Council, and on the Board of Trustees of Freedom House.

From 2003 to 2006, Admiral Blair was President and Chief Executive Officer of the Institute for Defense Analyses, a federally funded research and development center based in Alexandria, Virginia, that supports the Department of Defense, the Department of Homeland Security, and the Intelligence Community.

A graduate of the U.S. Naval Academy, Admiral Blair earned a master’s degree in history and languages from Oxford University as a Rhodes Scholar and was a White House Fellow at the Department of Housing and Urban Development. He has been awarded four Defense Distinguished Service medals and three National Intelligence Distinguished Service medals, and has received decorations from the governments of Japan, Thailand, Korea, Australia, the Philippines, and Taiwan.