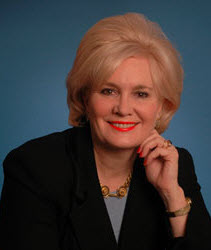 Deborah Wince-Smith is the President and CEO of the U.S. Council on Competitiveness. Founded in 1986, this unique business-labor-academia coalition of CEOs, university presidents, and labor union leaders puts forth actionable public policy solutions to make the United States more competitive in the global marketplace.

In 2004, Ms. Wince-Smith spearheaded the groundbreaking National Innovation Initiative (NII). The NII shaped the bipartisan America COMPETES Act, created state and regional innovation initiatives, and brought a global focus to innovation. She has also led a bilateral dialogue between the United States and Brazil on competitiveness and innovation strategy, including leading the 2007 and 2010 U.S.-Brazil Innovation Summits.

Ms. Wince-Smith serves as a director of several publicly and privately held companies, national and international organizations, and U.S. government advisory committees. She is also a Senate-confirmed member of the Oversight Board of the IRS. She chaired the secretary of commerce’s Advisory Committee on Strengthening America’s Communities and served on the secretary of state’s Advisory Committee on International Economic Policy. During her seventeen-year tenure in the federal government, Ms. Wince-Smith held leading positions in the areas of science, technology policy, and international economic affairs. Most notably, she served as the nation’s first Senate-confirmed assistant secretary of commerce for technology policy in the administration of President George H.W. Bush.

Ms. Wince-Smith received a BA from Vassar College and was one of the first female students to enter King’s College at the University of Cambridge, where she read for a master’s degree in classical archaeology. In 2006, she received an honorary doctorate in humanities from Michigan State University.