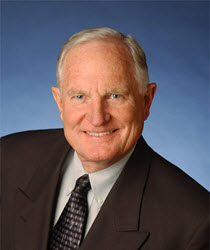 Craig R. Barrett is a leading advocate for improving education in the United States and around the world. He is also a vocal spokesman for the value technology can provide in raising social and economic standards globally.

He has served on numerous other boards as well as on policy and government panels. Until June 2009, he was chairman of the United Nations Global Alliance for Information and Communication Technologies and Development, which works to bring computers and other technology to developing parts of the world. Dr. Barrett has also been an appointee of the president’s Advisory Committee for Trade Policy and Negotiations and the American Health Information Community. He has co-chaired the Business Coalition for Student Achievement and the National Innovation Initiative Leadership Council and has served as a member of the Board of Trustees for the U.S. Council for International Business and the Clinton Global Initiative Education Advisory Board. Dr. Barrett has been a member of the National Governors’ Association Task Force on Innovation America, the National Infrastructure Advisory Council, and the Committee on Scientific Communication and National Security, and served on the Board of Directors of the U.S. Semiconductor Industry Association, the National Action Council for Minorities in Engineering, and TechNet.

Dr. Barrett received BS, MS, and PhD degrees in materials science from Stanford University. After graduation, he joined the faculty of Stanford University in the Department of Materials Science and Engineering and remained there through 1974. He was a Fulbright Fellow at Danish Technical University in Denmark in 1972 and a NATO Postdoctoral Fellow at the National Physical Laboratory in England from 1964 to 1965.