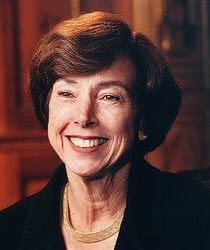 Ambassador Carla A. Hills is a member of the Board of Advisors at National Bureau of Asian Research.

Ambassador Hills is Chair and Chief Executive Officer, Hills and Company International Consultants. She is also

Ambassador Hills served as United States Trade Representative from 1989 to 1993. As a member of President George H.W. Bush’s Cabinet, Carla was the President’s principal advisor on international trade policy and as the nation’s chief trade negotiator, representing American interests in multilateral and bilateral trade negotiations worldwide. She negotiated and concluded the North American Free Trade Agreement, led the U.S. negotiations on the Uruguay Round of the World Trade Organization, and concluded a large number of trade and investment agreements with countries around the world.

Earlier, Amb. Hills served as Secretary of the Department of Housing and Urban Development (the third woman to hold a Cabinet position). She also served as the Assistant Attorney General, Civil Division, of the U.S. Department of Justice.

Before entering government, Amb. Hills co-founded and was partner in what is now the Munger, Tolles & Olson LLP law firm. She also served as an adjunct professor at the University of California at Los Angeles Law School teaching antitrust law, and co-authored the Antitrust Adviser, which was published by McGraw-Hill.

Over the years, she has served on the boards of a number of Fortune 500 companies. She currently serves on the International Advisory Board of J.P. Morgan Chase and the Advisory Board of C.V. Starr Co., Inc. She also serves in leadership positions with several not-for-profit organizations, including as Chair Emeritus of the National Committee on U.S.-China Relations and of the Inter-American Dialogue; member of the Board of the Center for Strategic and International Studies; Honorary Director of the Peterson Institute for International Economics; member of the Executive Committee of the Trilateral Commission; and Co-Chair Emeritus of the Council on Foreign Relations.

Amb. Hills graduated from Stanford University, attended Oxford University’s St. Hilda’s College, and obtained her law degree from the Yale Law School. She holds honorary degrees from a number, of colleges and universities. In 2000, she was awarded the Aztec Eagle, the highest honor given by the Mexican government to a non-citizen.

She resides in Chevy Chase, Maryland.