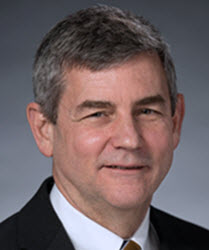 Petters assumed this role on March 31, 2011, when Northrop Grumman Shipbuilding began operating as the newly formed and publicly owned Huntington Ingalls Industries in a spin-off from Northrop Grumman Corp. He is also a member of the HII board of directors.

Petters is responsible for leading the design, construction and overhaul of conventionally powered surface combatants, amphibious and auxiliary ships, and nuclear-powered submarines and aircraft carriers, as well as business opportunities in adjacent markets. Prior to this appointment and since 2008, Petters served as president of Northrop Grumman Shipbuilding. Previous to this, he served as president of Northrop Grumman’s Newport News sector.

A native of Florida, Petters earned a bachelor’s degree in physics from the U.S. Naval Academy in 1982, served aboard the nuclear-powered submarine USS George Bancroft and spent five years in the U.S. Naval Reserve. In 1993, he earned a master’s degree in business administration from the College of William and Mary.