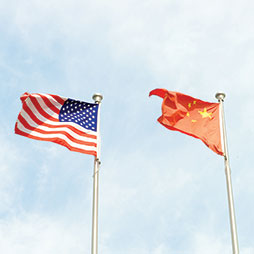 U.S.-China Relations: From Strategic Domains to the International System


On April 19,2016, NBR in partnership with the Institute for China-U.S. People-to-People Exchange at Peking University, convened a conference in Washington, D.C., on “U.S.-China Relations: From Strategic Domains to the International System.” Leading experts, including former officials from the United States and China, addressed critical issues in U.S.-China relations and explored how potential conflict and cooperation in these areas could affect regional stability and the global order. The experts offered pragmatic recommendations for furthering bilateral cooperation as well as for managing tensions, or even crises.

PANEL ONE: The Broad Contours of U.S.-China Relations

LUNCH KEYNOTE: Critical Issues on the Horizon of U.S.-China Relations

The conference consisted of three panels and a keynote lunch address. The first panel featured current and former government officials from China and the United States who gave an overview of recent developments in U.S.-China relations and looked ahead to issues and challenges in bilateral relations. The second panel focused on U.S.-China relations in three strategic domains: space, cyberspace, and nuclear relations. In particular, this panel highlighted NBR’s publication “U.S.-China Relations in Strategic Domains,” a report coauthored by U.S. and Chinese experts that examines the challenges to further cooperation in four strategic domains (maritime, space, nuclear, and cyberspace) and two bilateral modes of exchange (military-to-military and people-to-people).

The lunch keynote remarks were delivered by Admiral Samuel J. Locklear III (ret.), former commander, U.S. Pacific Command. Admiral Locklear’s comments focused on critical issues on the horizon for U.S.-China relations and stressed the importance of cooperation in the bilateral relationship. The final panel of the conference discussed China’s rise and integration into the international system and the implications for how the United States and China interact on global issues and governance. Specific topics addressed included the two countries’ differing perspectives on China’s role in the international system at large, on international governance of the life science sector, and on China’s One Belt, One Road initiative.

As China rises, Beijing and Washington are struggling to establish a common foundation on which to expand and deepen their bilateral relationship. While both sides seem to agree on the general importance of cooperating on global issues and managing competition, there is a need for more dialogue on how this goal can be achieved. This conference and the findings of the NBR report will help U.S. and Chinese policymakers and strategists identify the terms and conditions through which the two sides can better understand one another, avoid conflict, and enable cooperation across a range of critical issues and in global governance.