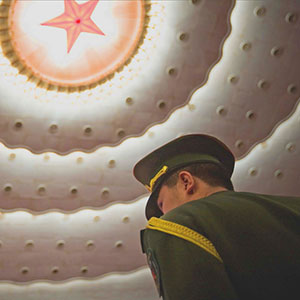 China’s military modernization has now reached a level that could disrupt the current balance of power in the Asia Pacific region and beyond. Moreover, Chinese military spending is expected to continue rising, while the U.S. defense expenditures is likely to come under increased pressure due to budgetary constraints. How China is investing in its military capabilities to match its economic might, and what that could mean for the stability of the region are the latest subjects examined by the National Bureau of Asian Research’s annual report, Strategic Asia 2012-2013: China’s Military Challenge.

With the end of the Iraq war and decreased troop presence in Afghanistan, there will be a strategic rebalance of U.S. military presence worldwide and the United States will focus more on the Asia-Pacific as part of a “great transition” in defense policy, said keynote speaker U.S. Deputy Defense Secretary Ashton Carter. As for the possibility of sequestration, he said that such a move would be a “disaster for defense,” adding that the United States must be able to “invest to sustain peace and prosperity.” The deputy secretary pointed out the need for a strong U.S. presence in the Asia Pacific to ensure that the region continues to prosper as it has done since the end of World War II. He also stressed that partnership between the United States and China on military as well as economic and political issues is essential to guarantee stability in the Asia-Pacific.

Questioned about the ongoing territorial dispute in the East China Sea, he emphasized the need for peaceful resolution, adding that all nations with vested interests should “not sacrifice the big game” for smaller victories, as it was ultimately in the interest of every country in the region to promote peace for continued growth.

Yet China’s military strength is clearly rising, both in conventional and non-conventional terms. During the first panel discussion regarding Chinese capabilities, Defense Group Inc’s deputy director Kevin Pollpeter argued that technological advancements in particular will boost Beijing’s capabilities to protect its national interest and project its influence not just in Asia, but worldwide. Meanwhile, the National Bureau of Asian Research’s senior associate Roy Kamphausen noted that while ground forces have been at the heart of the People’s Liberation Army until recently, its current structure and capabilities are not nimble enough to meet the changing needs of military operations moving forward. Granted, the possibility of a collapse in Pyongyang’s iron grip looms large for Chinese policymakers, but Kamphausen argued that “the PLA is not preparing to assist the North Korean leadership in the event of a crisis, but would respond to crises unilaterally.” Meanwhile, China is investing more in the navy rather than ground troops to reflect its growing overseas interests, Kamphausen added.

Certainly, China is investing more in its maritime as well as air power capabilities as it seeks to extend its activities further, including in the Indian Ocean, stated Andrew Erickson, associate professor at the U.S. Naval War College. As for possible U.S.-Chinese military partnerships, Erickson argued that it would be easier for the two nations to cooperate in theaters further away from China, rather than closer to its shores. On China’s long-range capabilities, the Project 2049 Institute’s executive director Mark Stokes said that its growing strength “could not only complicate the U.S. ability to operate in the Asia-Pacific region, but also give the PLA a decisive edge in securing control over the skies around its periphery should territorial disputes erupt into conflict.”

In discussing the regional and U.S. responses to China’s military strength during the second panel, Carnegie Endowment for International Peace’s senior associate Ashley Tellis pointed out that China’s military strength has challenged the local balance of power, which has “unsettled” neighboring countries, especially Japan and India. At the same time, Tellis stressed that regional expectations for the United States to remain a dominant power and “to make the right decisions” as the last line of protection persists.

As such, the United States needs to boost military spending to “protect its primacy in the Asia-Pacific in order to advance its strategic goals,” and the White House should have a wider range of options to prevent regional tensions from spiraling further, argued Dan Blumenthal, director of Asian Studies at the American Enterprise Institute. He added that the United States should also have the ability to “punish and weaken any aggressor that challenges U.S. primacy.”