The NextGen delegation at the Federation of Korean Industries.

The seventh delegation of the U.S.-ROK Next Generation Leaders Program (NextGen), comprising nine up-and-coming East Asia policy professionals, traveled to Seoul from October 28 to November 2, 2019. Led by Tami Overby (McLarty Associates), with the assistance of Clara Gillispie (NBR) and Julia Oh (NBR), the delegation engaged in timely discussions with representatives from the Republic of Korea (ROK), U.S. government agencies, and leading businesses and academic institutes on topics relating to trade, energy, technology, and the environment.

Over the course of the week, the delegates met with several different South Korean government ministries and other current and former policymakers to better understand how policymakers within the country are defining their top policy priorities. At a breakfast meeting with an official from the Ministry of Trade, Industry, and Energy (MOTIE), delegates gained an appreciation for both the ROK’s current economic outlook and how MOTIE is thinking about efforts to revitalize the country’s economic growth. Delegates also met with an assemblyman at the National Assembly, the Deputy Minister of the Ministry of Unification, and with the Presidential Committee on New Southern Policy, each of whom offered their own perspective on how best to strengthen Korea’s economy and further development. In addition, delegates visited the Ministry of Foreign Affairs and held discussions with the Director-General for North American Affairs about a range of political and economic policy topics, including the geopolitics of trade and the potential impacts of current regional trade tensions on Korea. Delegates not only met with members of the South Korean government, but also with U.S. government officials at the U.S. Embassy Seoul. 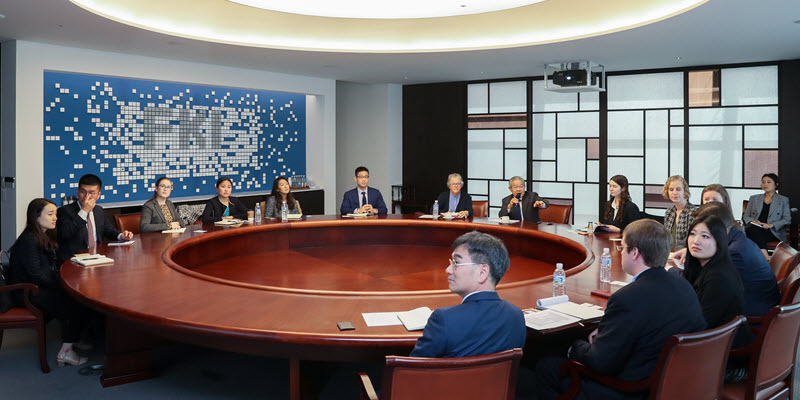 The delegates during their meeting with Kwon Tae-shin at the Federation of Korean Industries.

NextGen delegates also held meetings with members of the private sector in South Korea. They visited the Korean International Trade Association and met with Kwon Tae-shin, Vice Chairman and CEO of the Federation of Korean Industries. Each discussed their member priorities as well as the challenges and opportunities in strengthening Korea’s global economic competitiveness. Delegates also visited the American Chamber of Commerce in Korea (AmCham Korea) and met with James Kim, Chairman and CEO, who provided a perspective from U.S. industry on the current environment for business in the ROK, including where and how the recently modified Korea-U.S. Free Trade Agreement (KORUS FTA) fits in. At Boeing, delegates met with Ambassador Eric John, who offered a perspective on Korea’s development arc in regional context. Additionally, delegates had a breakfast meeting with Lee Hee-Beom, Advisor to LG International and President of the Organizing Committee of the 2018 PyeongChang Winter Olympic Games and Winter Paralympic games. 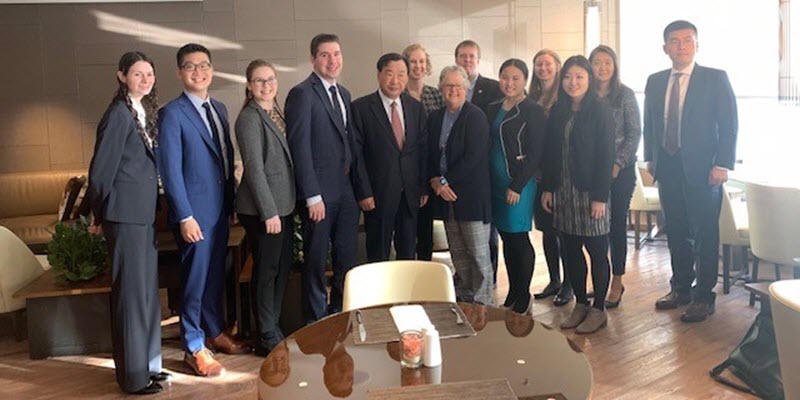 The NextGen delegates after their breakfast meeting with Lee Hee-beom.

The delegation had the opportunity to meet with a broad range of representatives from both the research community and the media. Choi Byung-il, a professor at Ewha Womans University, and Ambassador Choi Seokyoung, current senior advisor at Lee and Ko, met with delegates over lunch to discuss current regional trade trends and tensions, including offering views on the U.S.-China trade war.  Participants also met with members of the think-tank community, including the Korea Development Institute, and with several researchers at the Korea Institute for International Economic Policy. Additionally, delegates met over lunch with NextGen experts, including June Park from the American University of Beirut and Jiyeon Song from Kim and Chang. To cap off the week, the NextGen delegates had dinner with domestic foreign media correspondents in Seoul from news sources that included the Wall Street Journal, Maeil Economy, and NK News. 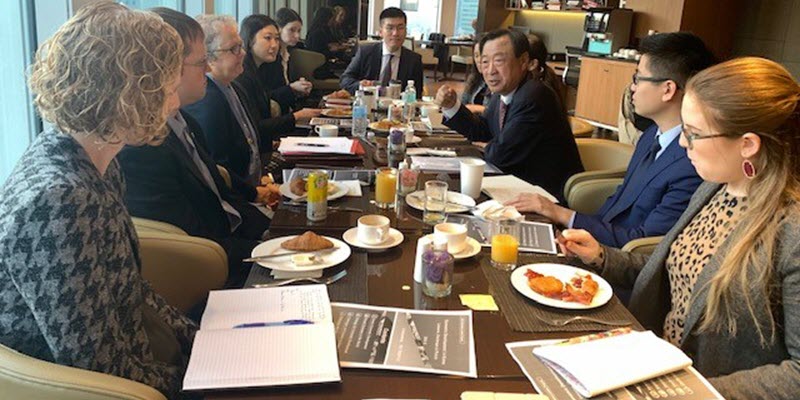 Delegates at a breakfast meeting with Lee Hee-Beom.

Participants also gained a greater understanding of Korean innovation and technology through visits to the Global Knowledge Exchange and Development Center, a museum, and the Hyundai Motors Innovation Center. The delegates were also able to gain an appreciation of Korean culture and history through visits to the Changdeok Palace and Secret Garden, as well as Insadong and the Lotte World Tower Observatory, with many delegates noting both the range of activities and exposure to the diversity of Korean cuisine options as key highlights from the program.