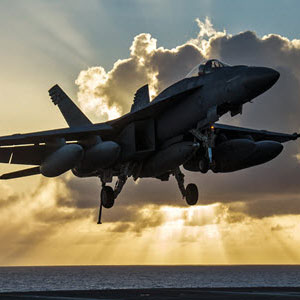 
On November 15, 2017, NBR held a discussion in Washington, D.C., on developing U.S. national security strategies for the Asia-Pacific to mark the release of the seventeenth volume in the Strategic Asia series: Strategic Asia 2017-18: Power, Ideas, and Military Strategy in the Asia-Pacific. Watch the video and read a summary of the event below.

To mark the release of Strategic Asia 2017–18: Power, Ideas, and Military Strategy in the Asia-Pacific—the culminating volume in a three-year study assessing the national power of major Asian states—NBR convened a discussion to discuss how states in the Asia-Pacific manage strategic competition in Asia.

NBR vice president and Strategic Asia co-editor Michael Wills began the event by introducing the Strategic Asia Program and announcing the culmination of the three-year project. Ashley J. Tellis, the research director of the Strategic Asia Program and co-editor of the volume, moderated the first panel and framed the discussion by outlining the research arc. The first year examined the material foundations of national power, the second year looked at the ideational question of strategic culture, and the third year assessed the impact of the interaction of material capabilities and strategic culture on national military strategy throughout the Asia-Pacific.

Following this overview by Dr. Tellis, the panelists had the opportunity to summarize their chapter findings. First, Oriana Skylar Mastro summarized five potential military strategies China might choose to mitigate internal and external security challenges: internal security, external defense/continental power, regional power projection, regional hegemony, and development of a globally relevant military. Dr. Mastro concluded that the current strategy employed by the People’s Liberation Army (PLA) is one of regional power projection. China’s national power has not yet reached a point where regional hegemony or a global strategy is a realistic option, nor is the PLA likely to downgrade its ambitions to an internal stability or external defense strategy.

Next, Mark Katz described Russia’s military strategy under Vladimir Putin. Despite China’s rise and varied internal threats, Dr. Katz argues that Putin perceives the West and the United States as the greatest threat to Moscow and Putin’s authoritarian rule. While Putin has continued to build up nuclear and conventional forces, he has employed various hybrid warfare methods aimed at weakening the United States and West instead of directly challenging Washington.

Third, Michael Auslin, the author of the Japan chapter in the 2015–16 volume, discussed the current strategic environment in Japan. Dr. Auslin described a complex strategic environment where Japan must consider domestic constraints, while also keeping regional and international threats at the forefront of strategic considerations. To address these threats, Japan has chosen to maintain a strategy of moderate regional power projection, while also cultivating closer relationships with Southeast Asian countries, India, and Australia and deepening the alliance with the United States.

To conclude the first panel, John H. Gill examined India’s dominant military strategy. Barring internal unrest or environmental disaster, India can be expected to play an increasingly prominent role on the world stage. However, despite India’s aspirations to take on greater regional and global responsibility, Professor Gill argues that it will be a challenge for New Delhi to respond to these new circumstance while still attending to existing concerns. He encouraged the United States and other interlocutors to remain engaged and employ strategic patience.

The second panel, moderated by NBR president Richard J. Ellings, featured a discussion on U.S. national security strategy with Brigadier General Robert S. Spalding III and Dr. Tellis. Dr. Ellings began the panel by asking Brigadier General Spalding about the long-term planning and policy approach in the Asia-Pacific. He explained that much of his focus has been on the relative GDP growth of the United States and China and how such growth affects military competition and assessments of projected capabilities. Dr. Tellis followed up on these comments by noting that the United States must focus on three factors when considering the strategic environment: political, defense, and economic. Finally, the panel concluded with a discussion of gray-zone aggression from China and Russia. Panelists commented on how the United States can best address such challenges, including China’s provocations in the South China Sea and Russia’s actions in Ukraine, while managing relationships between varied allies and competitors.

In the keynote address, Admiral Jonathan W. Greenert described his effort to distill the insights from the past three volumes of Strategic Asia into a document for those who will pen the new U.S. defense strategy. These volumes provide policymakers with the insights to understand the power, cultures, and strategies of the key players in the Asia-Pacific. Since the last U.S. Defense Strategic Guidance in 2012, the world and the United States have changed a great deal. Admiral Greenert argued that the United States must clarify its national goals and outline the ends, ways, and means of a national strategy for the Asia-Pacific if it is to retain its position in the region.

The two panels and keynote remarks by Admiral Greenert set the stage for U.S. policymakers to address critical challenges in the Asia-Pacific. Through expert analysis and discussion, this event brought to a close the current three-year Strategic Asia study and revealed the complexity and depth of the issues that policymakers must factor into their calculus of national power throughout the region.

About the Strategic Asia Program

The Strategic Asia Program aims to strengthen and inform strategic and policy decisions by providing innovative research on challenges and opportunities for U.S. national interests in the Asia-Pacific region. Learn more.