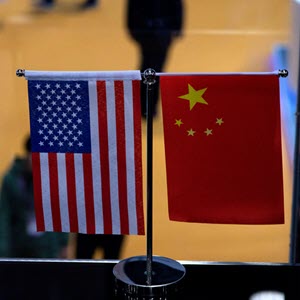 This picture taken on November 6, 2018 shows a Chinese and US flag at a booth during the first China International Import Expo (CIIE) in Shanghai. – There is a notable absentee among the dozens of national pavilions at a massive Chinese import fair — the United States — a no-show that underlines how Trump economic policies are causing trading partners to turn more toward China. (Photo by Johannes EISELE / AFP) / TO GO WITH AFP STORY US-CHINA-TRADE-DISPUTE-DIPLOMACY,FOCUS BY KELLY WANG AND DAN MARTIN (Photo credit should read JOHANNES EISELE/AFP via Getty Images)

Bookmark the permalink.
Intellectual Property in U.S.-China Relations: Developments in China’s IP Regime, the Trade War, and Anti-Suit Injunctions
This site uses cookies. Please read our Privacy Policy to learn how and why we use cookies.