← Impact of Covid-19 on Political Stability in China 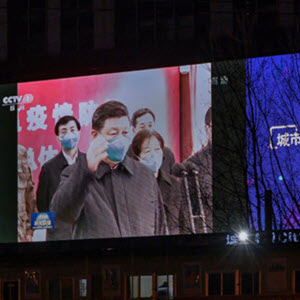 BEIJING, CHINA – MARCH 10: A large screen in the street shows Chinese president Xi Jinping wearing a protective mask during his visit to Wuhan earlier in the day, the epicentre of the coronavirus, on CCTV’s evening newscast on March 10, 2020 in Beijing, China. China’s top leader toured the city Tuesday for the first time since the outbreak began. The number of cases of the deadly new coronavirus COVID-19 being treated in China dropped to below 18,000 in mainland China Sunday, in what the World Health Organization (WHO) declared a global public health emergency last month. China continued to lock down the city of Wuhan, the epicentre of the virus, in an effort to contain the spread of the pneumonia-like disease. Officials in Beijing have put in place a mandatory 14 day quarantine for all people returning to the capital from other places in China and countries with a large number of cases like South Korea and Japan. The number of those who have died from the virus in China climbed to over 3140 on Tuesday, mostly in Hubei province, and cases have been reported in many other countries including the United States, Canada, Australia, Japan, South Korea, India, Iran, Italy, the United Kingdom, Germany, France and several others. The World Health Organization has warned all governments to be on alert and raised concerns over a possible pandemic. Some countries, including the United States, have put restrictions on Chinese travellers entering and advised their citizens against travel to China.(Photo by Kevin Frayer/Getty Images)