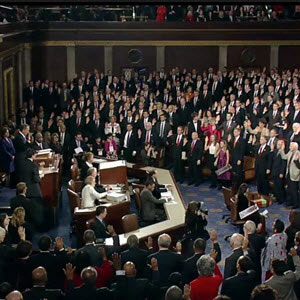 Whose Pacific Century? The 113th Congress and Asia

How Will the 113th Congress Address the Rebalance toward Asia?


In recognition of Asia’s increasing global importance, the United States is rebalancing to focus more attention on the region politically, economically, and militarily. The 113th Congress takes office as this strategy is being implemented. At a time of constrained resources and competing domestic priorities, Congress will play a pivotal role in determining and executing many aspects of the rebalance as it allocates funds, provides oversight, and ratifies trade agreements.

With this in mind, NBR hosted “Engaging Asia 2013: How Will the 113th Congress Address the Rebalance toward Asia?” on April 17 in Washington, D.C. This half-day conference provided high-level expert insight and discussion on the congressional priorities that will shape U.S. strategy in the region.

The event featured remarks from Congressman Rick Larsen on the role of Congress in the U.S.–China relationship and from Indonesia’s Ambassador Dino Patti Djalal on how Southeast Asia views the U.S. rebalancing. A panel discussion assessed the new NBR Analysis report “Whose Pacific Century? The 113th Congress and Asia” with co-author Edward Gresser (Progressive Economy) and practitioners from Capitol Hill.

REMARKS: The Role of Congress in Shaping U.S.-China Relations

REMARKS: Whose Pacific Century? The 113th Congress and Asia

REMARKS: The United States and Evolving Geopolitics in Asia: A View from Indonesia

Sonia Luthra is Assistant Director for Outreach at NBR.

Pamela Passman is President and CEO of the Center for Responsible Enterprise and Trade (CREATe.org).

Nien Su is the Senior Director for the Asia-Pacific (Republican Staff) at the House Foreign Affairs Committee. (off-the-record)