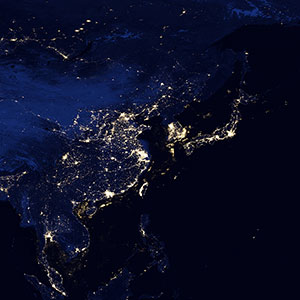 Energy-Efficiency Policies in the Asia-Pacific Can We Do Better?

Asian Energy Outlooks in 2016 and Beyond


Asia has emerged as the center for global energy demand, and forecasts from the Asian Development Bank predict that the region will constitute 56% of world energy consumption by 2035. As energy accounts for two-thirds of the world’s greenhouse-gas emissions according to the International Energy Agency, choices made in the region will have a profound effect on global energy and environmental security.

Taking place following the conclusion of the United Nations Climate Change Conference in Paris, this event featured presentations on energy and environmental outlooks for key players in the Asia-Pacific by senior experts.

Li Bin, Counselor for Economic Affairs, Embassy of the People’s Republic of China to the United States of America

Pankaj Bhatia is Deputy Director of the World Resources Institute (WRI)’s Climate Program and Director of WRI’s new Tools, Reporting and Analysis for Climate Signature Initiative. As Deputy Director, Mr. Bhatia helps manage one of WRI’s largest programs and oversees additional Signature Initiatives on U.S. Climate Action, and International Climate Action, as well as the GHG Protocol. In addition to his role within WRI’s Climate Program, Mr. Bhatia is one of the leading experts and authorities on GHG Protocol standards and tools, particularly in the areas of corporate, scope 3, mitigation action, and city accounting.

From 1998 to 2000, Mr. Bhatia was vice presidentof Tata Energy & Resources Institute, a not-forprofit research organization based in Arlington, Virginia and affiliated with The Energy & Resources Institute (TERI), in New Delhi, India. From 1993 to 1998 he served TERI New Delhi on various projects related to implementation of the Montreal Protocol in India and the development of environment policy for technology transfer and capacity building in Indian industry. Mr. Bhatia holds a master’s degree in process engineering from the Indian Institute of Technology, Delhi and a bachelor’s degree in chemical engineering from the Institute of Technology of Banares Hindu University in Varanasi, India.

Clara Gillispie is Director for Trade, Economic, and Energy Affairs at The National Bureau of Asian Research (NBR). In this capacity, Ms. Gillispie leads research, publications, and activities for a range of initiatives, including NBR’s Energy Security Program, the Pacific Energy Summit, and the organization’s programming on innovation and intellectual property policymaking.

Prior to joining NBR in 2011, Ms. Gillispie served as a consultant for Detica Federal Inc., where she conducted program assessments and policy reviews for U.S. government clients. She has also interned with both the U.S. House Committee on Science, Technology, and Space and the American Chamber of Commerce in the People’s Republic of China. Ms. Gillispie graduated from the London School of Economics and Peking University with a dual MSc in International Affairs.

Roy D. Kamphausen is Senior Vice President for Research at the National Bureau of Asian Research (NBR). He is also an Adjunct Associate Professor at Columbia University’s School of International and Public Affairs. Prior to joining NBR, Mr. Kamphausen served as a U.S. Army officer. As a China Foreign Area Officer, his career included assignments as China policy director in the Office of the Secretary of Defense, China strategist for the
Chairman of the Joint Chiefs, and a military attaché at the U.S. Embassy in Beijing.

Mr. Kamphausen holds a BA in Political Science from Wheaton College and an MA in International Affairs from Columbia University.

Takashi Kume is Special Advisor to Japan’s Ministry of Economy, Trade and Industry (METI) and Director of JETRO (Japan External Trade Organization) New York. He covers a wide range of economic, energy, and trade issues. Before he was assigned to his current role, Mr. Kume devoted his career at METI to managing numerous industry-related issues, especially in energy and information technology (IT). Mr. Kume served as Director for Coordination of Nuclear Policy at the Agency for Natural Resources and Energy, where he coordinated Japan’s energy policy, especially related to nuclear energy after the accident at Fukushima Daiichi Nuclear Power Station, and supervised the Tokyo Electric Power Company (TEPCO). Prior to that, Mr. Kume was assigned to the position of Director at the Task Force of the Reform of Nuclear Safety Regulations and Organizations and was responsible for establishing the Nuclear Regulation Authority (NRA). During his career at METI, Mr. Kume spent seven years working on IT-related issues, where he focused on security and reliability of IT systems and promotion of competition in the software industry as well. Mr. Kume received an LL.M. from Harvard Law School in 1999 and was admitted to the New York State Bar in 2000. After completion of his LL.M., Mr. Kume served as an International Associate at Shearman and Sterling in Washington, D.C., from 1999 to 2000.

Li Bin is Counselor for Economic Affairs for the Embassy of the People’s Republic of China in Washington, D.C., a position that he has held since July 2011. Prior to this, he lived in the People’s Republic of China and served as the Deputy Director General of the Department of Foreign Affairs of the State Development Planning Commission, now the National Development and Reform Commission. Mr. Li began his career with the State Development Planning Commission in 1994 as Deputy Division Chief and was promoted to Division Chief in 1999.