Securing the China Dream: The PLA’s Role in a Time of Reform and Change


In October 2017, the National Bureau of Asian Research, the Strategic Studies Institute (SSI) of the U.S. Army War College, the U.S. Pacific Command (USPACOM), and the Headquarters, Department of the Army jointly convened a conference of leading experts on the Chinese military in Carlisle, Pennsylvania. The theme of the 2017 annual People’s Liberation Army Conference was “Securing the China Dream: The PLA’s Role in a Time of Reform and Change.” 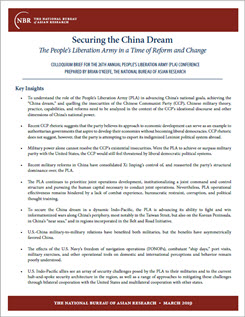 The Chinese leadership under Xi Jinping has envisioned a China that is stronger, richer, and more influential on the world stage. To achieve these goals, Xi has overseen a series of comprehensive reforms that seek to strengthen the economy, promote common social values, and advance national interests. Commensurate with these priorities is the requirement for a modern, more capable military to support the country’s growing interests, especially beyond its borders. Against this backdrop, the PLA is undergoing major structural reforms to ensure a more integrated joint force better suited for a wider scope of responsibilities.

Yet, as China’s perception of its place and role in the world evolves, the international order is also in flux–pointing to greater uncertainty ahead. This year’s theme examined the PLA within the strategic context of an evolving China and a shifting international system and analyzed how this restructured force operates in support of national objectives. Speakers explored the PLA’s ability to fight and win informationized local wars along China’s periphery, overcome security challenges to the ambitious Belt and Road Initiative, and effectively project national power. The conference culminated in a discussion of U.S. policy positions as well as regional perspectives from the Asia-Pacific.

For the first time, the conference featured break-out sessions on PLA operational thinking in four contingencies: on the Taiwan Strait, the Korean Peninsula, China’s near seas, and China’s expanding Belt and Road Initiative.