A delegation of the Next Generation (NextGen) Leaders, comprising nine up-and-coming scholars on East Asia policy issues from Washington-based think tanks, made a week-long trip to Seoul, South Korea, from December 4 to December 10, 2016. Led by John S. Park (Harvard Kennedy School) with the assistance of Alison Szalwinski (NBR) and Julia Oh (NBR), the delegation engaged in timely discussions with representatives from the Republic of Korea (ROK), U.S. government agencies, and leading research institutes on a range of policy issues.

The delegation with National Assembly members from three political parties

The NextGen Leaders received private briefings on the role of social media and big data in the current political situation in the ROK, as well as on ROK domestic politics as a whole, in preparation for later meetings with Korean policymakers. The delegation exchanged perspectives on key policy issues through meetings with representatives from different government agencies. Through a roundtable with ROK National Assembly members from the Saenuri Party, the Minjoo Party, and the People’s Party, delegates discussed the incumbent and opposition parties’ domestic and foreign policy priorities.

The delegation at the Ministry of National Defense

The delegation then attended a meeting hosted by officials at the Blue House, a briefing at the ROK Ministry of National Defense, and a meeting at the Ministry of Foreign Affairs. Through these meetings, the participants developed a better understanding of the ROK government’s view of the U.S.-ROK alliance and the ROK’s defense and diplomatic strategies toward Japan, China, and North Korea.

The delegation with Foreign Area Officers

On the U.S. government side, the delegation met with officials and policymakers who are at the front line in promoting a robust U.S.-ROK alliance. The United States Forces Korea (USFK) Chief of Strategy Bryan Port hosted the delegation for a briefing on bilateral military relations, at which he explained the USFK’s role in and strategies for strengthening the U.S.-ROK alliance and responding to common security threats. The briefing was followed by a luncheon discussion with Foreign Area Officers serving in Seoul. The participants also had an opportunity to meet with staff from the Joint U.S. Military Affairs Group Korea. Delegates were fortunate to have the opportunity to attend a reception in their honor hosted by Deputy Chief of Mission Mark Knapper, followed the next day by a reception at U.S. Ambassador to Korea Mark Lippert’s residence. In both instances, participants discussed the diplomatic and economic progress in bilateral relations in conversations with embassy officials and subject-matter experts.

In addition to speaking with government officials, the NextGen Leaders also met with scholars, journalists, representatives of private business, and human rights activists. During a meeting with students and professors from Seoul National University, the two sides exchanged views on U.S.-ROK-Japan trilateralism and explored areas for expanding trilateral cooperation. Foreign correspondents from media organizations, including the Wall Street Journal, Asahi Shimbun, NK News, Reuters, and BBC, attended a dinner with the young scholars and shared their thoughts on the media landscape in the ROK. At a breakfast meeting, the NextGen Leaders received insights on the business climate in the ROK from the president of the American Chamber of Commerce in Korea, John Schuldt. The delegation also had the opportunity to listen to staff from the Seoul office of the National Democratic Institute, North Korean human rights activists, and North Korean defectors discuss the current status of human rights in North Korea.

The NextGen delegation in front of the Blue House

To gain appreciation of the ROK’s vibrant culture and historical legacies, the delegation visited Kyungbok Palace, Insadong, and toured the Blue House. The NextGen Leaders capped off the week by traveling to the Joint Security Area at the Demilitarized Zone (DMZ), where they were briefed by United Nations Command on the history of the DMZ and the current state of the armistice before standing at the military demarcation line and looking into North Korea. 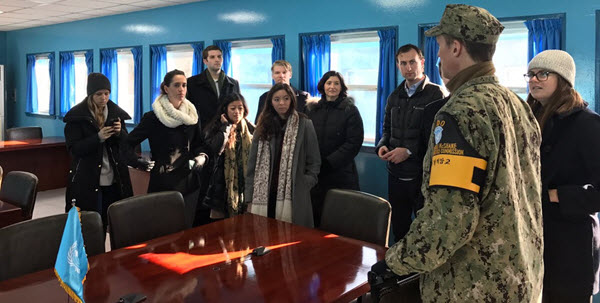 About the U.S.-ROK Next Generation Leaders Program

NextGen Leaders is an educational program designed for emerging and established policy leaders in the United States to visit the Republic of Korea (ROK), develop a rich understanding of U.S.-Korea policy issues, and form close and continuing ties with each other and the Korean policymaking community. Learn more.