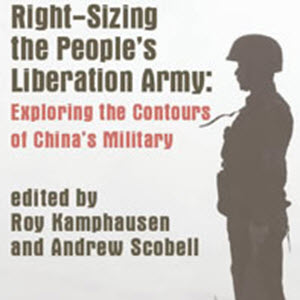 
From October 6–8, 2006, NBR and the Strategic Studies Institute of the U.S. Army War College convened more than 60 leading experts on China’s People’s Liberation Army (PLA) at Carlisle Barracks, Pennsylvania, for a discussion of the drivers of PLA force modernization. Conference participants explored how the leadership of China and the PLA view what size of PLA best meets China’s requirements.

Among other things, this analytical process makes important new contributions on the question of PLA transparency, long an issue among PLA watchers. A great deal of emphasis has been put on understanding not only how, but also why a military modernizes itself.

Some of the determining factors are national policies and strategy, doctrine, organizational structure, missions, and service cultures. While this list is not exhaustive, it does begin to paint a picture of just how broad and deep military interests run. It is important when we look at the structure and strategy for growth within the Chinese military that we see the world as China sees it. We need to see a world in which the “Taiwan issue” as well as that of North Korea and others are not viewed as short-term concerns, but fit into how China sees itself in a long-term leadership role in the region and in the world.