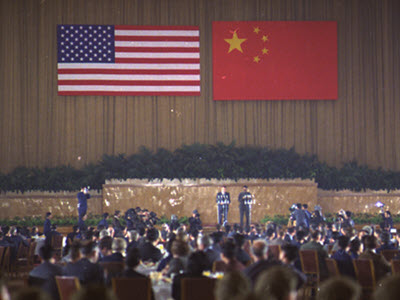 Was It Really the “Week That Changed the World”?

On February 28, 1972, the United States and China officially announced the normalization of U.S.-China relations by issuing the Shanghai Communiqué. To mark the 50th anniversary of this consequential agreement, NBR asked David Shambaugh, a member of the NBR Board of Advisors, to reflect on this historic milestone and the current state of U.S.-China relations.

President Richard M. Nixon’s historic visit to China in February 1972 was hailed (perhaps hyperbolically) as the “week that changed the world.”[1] Looking back half a century later, to what extent was this true? If so, how so? The Nixon visit to China can be said to have catalyzed four main consequences, each of which have had a true global impact.

First, as is well known, there was a geostrategic rationale for the opening. Both the United States and China viewed the Soviet Union as an immediate and pressing military threat, but also as an expansionist power. Beijing, in particular, realistically feared a nuclear or conventional attack following the 1968 Soviet invasion of Czechoslovakia and pronouncement of the Brezhnev Doctrine.[2] Moscow was also supporting insurgent movements and proxy regimes across Asia and Africa at the time, competing with both U.S. and Chinese proxies. By opening ties and aligning with each other, increased geostrategic pressure was brought to bear on the “polar bear” from several directions.

This rationale provided the “strategic glue” for the relationship—but it really only lasted for a decade. In 1982, China announced its “independent foreign policy” at the 12th Party Congress—which was codeword for a more equidistant rebalancing in Chinese foreign policy between the United States and Soviet Union. Deng Xiaoping still had his demands of Moscow to renormalize bilateral relations,[3] which had been ruptured since 1960, but beginning in 1983, Deng began the step-by-step process of rapprochement with Moscow, which accelerated once Mikhail Gorbachev came to power in 1985. By May 1989, all of Deng’s conditions had been met and Sino-Soviet relations ended their hiatus—and along with it the central geostrategic rationale of Nixon’s visit. This was two years before the collapse of the Soviet Union and official end of the Cold War. Subsequently, the Sino-American relationship lost its “strategic glue” and has never found a new substitute since.

The second animating rationale for Nixon’s trip was less expedient and much longer-term: to bring China out of its isolation and into the family of nations. Little noticed at the time was the way Nixon described China in a 1967 article in Foreign Affairs. After some tough talk, he opined:

Taking the long view, we simply cannot afford to leave China forever outside the family of nations, there to nurture its fantasies, cherish its hates and threaten its neighbors. There is no place on this small planet for a billion of its potentially most able people to live in angry isolation.[4]

This was the vision for integrating China into the post–World War II global order—truly a strategic goal with global consequences, one that seven subsequent presidents (until Donald Trump) subscribed to. It took the better part of five decades to institutionally embed the People’s Republic of China into the international order, but generally speaking it can be concluded that Nixon’s call has largely been met.

The third of Nixon’s goals can also be found in the 1967 article, where he said:

The world cannot be safe until China changes. Thus our aim, to the extent that we can influence events, should be to induce change. The way to do this is to persuade China that it must change: that it cannot satisfy its imperial ambitions, and that its own national interest requires a turning away from foreign adventuring and a turning inward toward the solution of its own domestic problems.[5]

Nixon may not exactly have had economic modernization specifically in mind, but the year after his visit, Premier Zhou Enlai launched the Four Modernizations program.[6] It took the end of the Maoist era and coming to power of Deng Xiaoping in 1978 to reboot the Four Modernizations policy and fully launch China on the path of economic development—which has resulted in it becoming the second-leading economic power in the world today. In five decades, China has gone from being a very poor developing country to a middle-income one that is now setting global standards in technologies and many other fields. World history has never witnessed a nation modernizing with this scale, scope, or speed. Chinese citizens now also enjoy numerous personal freedoms that they never had when Nixon visited. Politically, China remains a very repressive Leninist/Orwellian party-state under Xi Jinping, but the political system is far more institutionalized and responsive than under Maoist totalitarianism.

The fourth accomplishment that the Nixon visit set in train was the normalization of bilateral diplomatic relations with the United States. Because of Nixon’s resignation following the Watergate scandal in 1974, official normalization was not achieved until 1979 during Jimmy Carter’s presidency. Over the subsequent four decades, U.S. and Chinese societies built deep roots of interdependence across many sectors—to their mutual benefit. These ties were buttressed by a broad range of governmental linkages at the national, state, and local levels.

In recent years, however, we have been witnessing a significant unraveling of these links and channels of communication. While many bonds remain—notably in the commercial and educational spheres, and millions of Chinese have emigrated to the United States—a distinct decoupling is underway. Today, a new comprehensively competitive dynamic grips the relationship, with acrimony and mutual suspicions now being pervasive.

How long this new acrimonious phase will last remains to be seen. If there is one consistent pattern in the 50 years since the Nixon-Mao opening, it is that occasional periods of tension are not permanent. Despite their differences—which are many and real—there nonetheless remains a strong intrinsic attraction between the two societies. Time will tell if the two sides can rediscover mutual commonalities, or whether—as Henry Kissinger has described it—we are in the “foothills of a [new] Cold War.”[7]

David Shambaugh is the Gaston Sigur Professor of Asian Studies, Political Science, and International Affairs and Director of the China Policy Program in the Elliott School of International Affairs at George Washington University. He is also a member of the NBR Board of Advisors. His latest book is China’s Leaders: From Mao to Now (2021).

[1] Like many other Americans, I (at the age of 19) watched the visit on television with fascination.

[2] The Brezhnev Doctrine asserted that the Soviet Union reserved the right to intervene in any socialist country where the party-state was under threat from domestic or foreign (anti-socialist) elements.

[3] The three conditions were (1) severing the Soviet Union’s alliance with Vietnam, removing its military forces from Vietnam, and stopping support of Hanoi’s occupation of Cambodia; (2) drawing down Soviet forces along the Sino-Soviet border to the level of 1964 and withdrawing them from Mongolia; and (3) withdrawing occupying Soviet troops from Afghanistan.

[6] The Four Modernizations focused on agriculture, industry, science and technology, and national defense.