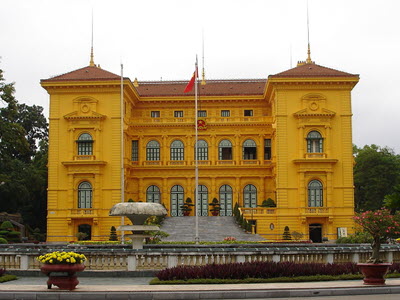 CC by I, Ondřej Žváček

This Country Profile for Vietnam is from the Maritime Awareness Project.

Vietnam claims the Paracel Islands (known as Hoang Sa in Vietnamese), which are also claimed by both China and Taiwan (and are known as the Xisha in Chinese), while China exercises control over the islands. Vietnam further claims the entirety of the Spratly Islands (known as Truong Sa in Vietnamese), as do China and Taiwan (which refer to them as Nansha). Malaysia, the Philippines, and Brunei also claim parts of the Spratlys. In the Spralty Islands, Vietnam currently occupies 25 features.

Vietnam argues that it has maintained effective occupation of both the Paracel and Spratly Islands since at least the seventeenth century, before which they were terra nullius. Vietnam further points to a series of historical documents to bolster its claims to the islands. The earliest of these – “Route Maps from the Capital to the Four Directions (Toan tap Thien Nam tu chi lo do thu)” – dates from 1686. Another example, “The Complete Map of the Unified Dai Nam” dates from 1838 and shows the two archipelagoes as a unit encircled by dotted lines belonging to Vietnam. Each archipelago has its own name, Van Ly Truong Sa and Hoang Sa.

Under French rule, administrative rule of the Paracels was transferred in June 1932 to Thua Thien Province, and the Spratlys were merged in December 1933 with Ba Ria Province of the Cochinchine Authority. In 1949, France transferred sovereignty over Cochinchina, including the Spratlys, to the administration of the last emperor, Bao Dai, in the new State of Vietnam. Vietnam further maintains that the other 50 states attending the San Francisco Conference in September 1951 all recognized its sovereignty over the Paracel and Spratly Islands without objection. This sovereignty transferred to the South Vietnamese government and later, after 1975, to the unified Vietnamese government. Vietnam maintains that China, through use of force, expelled Vietnam from these islands and then occupied them.

“We are of the view that the adoption of the Declaration on the Conduct of Parties in the East Sea between ASEAN and China followed by the formation of a Code of Conduct in the East Sea is of crucial importance, which will create the premises for a fundamental and lasting solution to disputes in the East Sea.”

“Coming home to Southeast Asia, it is incumbent upon the concerned parties to fully implement the Declaration on the Conducts of Parties in the South China Sea (DOC) and work towards the conclusion of a Code of Conducts (COC) between ASEAN and China.”

“Vietnam has indisputable sovereignty over the Hoang Sa and Truong Sa Archipelagos.”

“As a directly related country, Vietnam is committed to seriously implementing the Declaration on the Conduct of Parties in the South China Sea (DOC) and Guidelines for the Implementation of the DOC signed between ASEAN and China, the Agreement on the Basic Principles for the Settlement of Maritime Issues between Vietnam and China, and committed to working actively with ASEAN countries to push ahead negotiations with a view to early signing with China the Code of Conduct of Parties in the South China Sea (COC), in keeping with the spirit of the Statement of ASEAN Foreign Ministers covering ASEAN’s 6-point Principles on the South China Sea. At the same time, Vietnam urges other countries to respect its legitimate interests as a coastal nation, including sovereign rights and jurisdiction over its continental shelf and exclusive economic zones as stipulated by international law, particularly the United Nations Convention on the Law of the Sea of 1982.”

“Vietnam reiterates its consistent compliance with the ASEAN Six-point Statement on the South China Sea and will do its utmost to work together with ASEAN and China to seriously observe the DOC and soon arrive at the COC. As a coastal State, Vietnam reaffirms and defends its legitimate rights and interests in accordance with international law, especially the 1982 UNCLOS.”

“Vietnam has sufficient historical and legal evidence proving our sovereignty over Hoang Sa [Paracel] and Truong Sa [Spratly] archipelagos, and the exclusive economic zone and continental shelf in line with international law. We are determined to protect every inch of our land or sea from violation. For every Vietnamese, national territorial sovereignty is sacred and sacrosanct.”

“Viet Nam welcomes the fact that, on 12 July 2016, the Tribunal issued its Award in the arbitration between the Philippines and China…

Viet Nam strongly supports the settlement of disputes in the East Sea by peaceful means, including legal and diplomatic processes, refraining from the use or threat of use of force in accordance with international law, including the 1982 United Nations Convention on the Law of the Sea, maintenance of regional peace and stability, security, safety and freedoms of navigation and over-flight in the East Sea, and respect for the rule of law in the oceans and seas.

July 1961: By decree 174-NV, the Paracels were moved from Thua Thien Province to Quang Nam Province.

1971/1973: North Vietnam proclaimed the Spratly Islands to be Vietnamese territory.

July 1973: The South Vietnamese government awarded eight offshore tracts, including several near the western edge of the Spratly Islands.

April 1975: Vietnam seized six of the Spratly Islands that South Vietnamese troops had occupied earlier in the year.

1976: Vietnam published a map of the new united Vietnam that included both the Paracel and Spratly Islands.

May 1977: Declaration of the Vietnamese government of a territorial sea of twelve nautical miles (nm), a contiguous zone, an exclusive economic zone of 200 nm, and a continental shelf.

November 1982: Declaration of the Vietnamese government on the baseline for determination of territorial sea width.
December 1982: The Council of Ministers of Vietnam established the district Hoang Sa (Paracels) belonging to Quang Nam-Da Nang Province.

December 1982: Resolution of the Vietnamese National Assembly to move the district of the Spratly Islands from Dong Nai Province to Phu Khanh Province.

March 1988: China and Vietnam engaged in a brief naval skirmish on and around Johnson South Reef in the Spratly Islands. The skirmish ended with China controlling the reef, and 64 Vietnamese were killed.

May 1992: The Vietnamese Permanent Mission to the United Nations sent a note to state members of the United Nations to confirm the Tu Chinh area located on the continental shelf of Vietnam in rejecting the contract signed between the China National Offshore Oil Corporation (CNOOC) and the American oil company Crestone on the Tu Chinh bank.

June 23, 1994: Resolution of the Vietnamese National Assembly to ratify the 1982 United Nations Convention on the Law of the Sea (UNCLOS).

December 2000: Chinese president Jiang Zemin and Vietnamese president Tran Duc Luong signed the Tonkin Gulf agreements. The agreements included the delimitation of the territorial waters, continental shelves, and exclusive economic zones for the northern portion of the gulf and an agreement on fisheries within these waters.

May 2003: The Vietnam Ministry of Foreign Affairs issued a declaration asserting Vietnamese sovereignty over the Paracel and Spratly Islands.

March 14, 2005: CNOOC of China, PetroVietnam, and the Philippine National Oil Company signed a tripartite agreement to conduct joint marine seismic exploration in an area in the South China Sea. The term of the agreement was three years.

May 2009: Malaysia and Vietnam submitted a joint proposal on the outer-limits of their continental shelves in the South China Sea to the UN Commission on the Limits of the Continental Shelf.

May 2009: Vietnam submitted information on its claim to a continental shelf in the northern portion of the South China Sea to the UN Commission on the Limits of the Continental Shelf.

May 2009: After China challenged Vietnam’s submissions to the Commission on the Limits of the Continental Shelf and attached a map of the South China Sea depicting the nine-dash line, Vietnam protested the Chinese map stating that the line has “no legal, historical or factual basis, and therefore is null and void.”

June 2011: Vietnam held live-fire drills in the South China Sea. Chinese state media denounced the exercises as a military show of force in defiance of China.

June 2012: Vietnam passed a national maritime law that declared sovereignty and jurisdiction over the Paracel and Spratly Islands.

November 2012: China issued new passports with maps that included the Paracel and Spratly Islands. Vietnam and the Philippines sharply criticized the move, with Vietnam lodging a formal complaint with the Chinese embassy in Hanoi.

May-July 2014: The deep-water HYSY 981 drilling rig, owned by CNOOC, began exploration and drilling operations off Triton Island (Zhongjian Dao in Chinese) in the Paracel Islands. Vietnam contested the move and sent coast guard vessels to confront the rig. Dozens of Chinese and Vietnamese maritime vessels subsequently amassed near the rig and engaged in a standoff before China finally moved it out of the area.

December 2014: Vietnam submitted its position on the South China Sea to the arbitration tribunal established to hear the Philippines’ claims against China.

According to the BBC, “the Paracels and the Spratly Islands may have reserves of natural resources around them.” However, “there has been little detailed exploration of the area, so estimates are largely extrapolated from the mineral wealth of neighboring areas.”

In addition, the South China Sea is both strategically and economically vital to the region. It is both a major transportation nexus and a rich fishing ground.