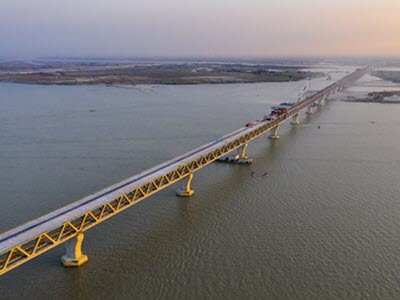 NBR advisor Tariq Karim traces the bridging role of Bangladesh from historical Bengal through its development as an independent state since 1971. Ambassador Karim argues that the United States and Bangladesh need each other and that it is in the United States’ interest to foster the mutual relationship.

Our planet Earth was so named by human beings who are essentially terrestrial creatures. Their vision was necessarily nestled in their viewing their planet from wherever they inhabited it, their perspective shaped by their habitat on terra firma.

But let us imagine how a visitor from outer space, from another galaxy, voyaging across space in search of new planets, would react on discovering our planet for the first time. In sharp contrast to other planets, our visitor would see a planet that is 71% covered with oceanic waters, with continental land masses as floating islands on these oceanic expanses. All the oceans would appear interconnected. Such a visitor, one may well imagine, might name this planet of ours as “Oceana.”

Zooming in from outer space on our oceanic planet, our intergalactic visitor would see the vast Pacific Ocean on the east, the Atlantic Ocean on the west, the Antarctic Ocean on the south, and the Indian Ocean in the center of this oceanic geosphere. Quite appropriately, therefore, geographers on Earth refer to the Indian Ocean as the great “great middle bay.” Zooming in more, our intergalactic visitor would see the Bay of Bengal, the largest bay in the world with an expanse of over 2.1 million square kilometers, as the “lesser middle bay” in this great middle bay. Now, tempted to zoom in farther on this triangular Bay of Bengal, our visitor from outer space would view Bangladesh, at the apex of the inverted funnel-shaped water body, as being at the epicenter of this oceanic planet.

HISTORICAL DEVELOPMENT AND LEGACY OF BANGLADESH

Bangladesh derives its historical legacy, and its current importance, from its geographic location at the epicenter of this vast oceanic planet of ours. Let us not forget that precolonial Bengal was famed since time immemorial as a land of rich culture and agricultural resources and recorded in history from fourth century CE by travelers and traders journeying west from the east or east from the west. At the height of Moghul rule in India, Bengal reportedly contributed 40% of the then global GDP. During British colonial rule over India, Bengal was the largest of its three administrative presidencies and reportedly contributed the highest GDP with its summer capital, Shillong, boasting the highest per capita GDP.

What enabled Bengal to achieve such remarkable attention? Historically, it was primarily through the web of riverine and maritime lanes extending through Bengal via the coastal ports of Burma (modern Myanmar), Malaysia, and Sumatra via Malacca to points farther east. Colonial Britain added to this pre-existing riverine circulatory system a railway network from 1844 onward. The Eastern Bengal Railway network that spanned Bengal and Assam and extended to Burma was commissioned in 1857. By 1901, Colonial Britain had established in India a rail network covering 25,373 miles. With the railways vastly augmenting the riverine routes, historical Bengal became a vital bridging country, as is today’s Bangladesh, oceanically connecting the Western and Eastern Hemispheres.

Historical Bengal flourished because of this bridging role. Modern Bangladesh is already discovering the benefits of acting as a connectivity facilitator between west and east. Its surge in growth and ability to attract attention and investment flows over the last decade are derived from this perceived newly established stature. This enables Bangladesh to claim today its legacy as the successor of that historic, civilizational Bengal of yore, ready to act as a hub of connectivity promoting free trade and exchange of goods, services, ideas, and cultural flows between the Eastern and Western Hemispheres. To give credit where it is due, this would not have happened without the bold and visionary leadership that realized the importance of ensuring better bilateral relations with all immediate neighbors and embarked determinedly on revival of all connectivities that had existed prior to 1947 and were systematically uprooted after 1965.

RE-EVALUATING BANGLADESH’S POSITION AND ROLE WITHIN THE GLOBAL COMMONS

Today, Bangladesh is not an inconsequential country. It is certainly not the “bottomless basket case” it was contemptuously dismissed as being on its wresting independence from neocolonialism in 1971. It not only survived as a state, but is globally looked on with respect and admiration as one of the fastest-growing economies—not just in the region but in the world. Bangladeshis can proudly claim that they have better human development indices than most of their neighbors. Two and a half generations on from its gory liberation as a nation, Bangladesh has a vibrant youthful population that is forward-looking, replete with high aspirations, supremely self-confident, and exuding pride in their nation and their achievements to date. Its business community has demonstrated its entrepreneurial talents and zest by driving the engine of national growth.

Bangladesh’s bold and visionary leadership has stabilized the country economically and led it on the path to prosperity. This same leadership has re-emphasized to the world Bangladesh’s identity as a moderate, secular, inclusive Muslim-majority state with deeply imbedded democratic aspirations that has zero-tolerance toward forces of radicalism, terrorism, and destabilization of any kind. Of course, it understands fully that the path to consolidating these lofty goals can be strewn with many hurdles and impediments. By contributing the largest numbers of military, police, and civilian personnel to the UN Peacekeeping Force and its global peacebuilding efforts, Bangladesh has palpably demonstrated its core commitment to peace and justice for all. Bangladeshis understand, located as they are on this turbulent oceanic planet, that they can only have peace and prosperity for themselves by striving for the same for everyone, everywhere. But they also understand well, viewing the much longer experiences of others far and wide, that they are at the beginning of a long and arduous journey.

Ensuring economic prosperity and stability, deepening and broadening its educational base, and ensuring equal participation by women along with gender equality and social stability are the prerequisites for the first stage of development of any state, for progressing, consolidating, and stabilizing its foundational pillars. This enables a state to advance to organically ensuring social equity, inclusivity, good governance, and respect for human rights with justice for all. Most advanced industrialized nations have organically traversed this same path centuries ago. Bangladeshis are only now embarking on this second stage of development.

POTENTIAL FOR GROWTH: THE NEXT 50 YEARS OF U.S.-BANGLADESH TIES

The focus of attention by almost all major, middle, or minor powers has pivoted to Asia. Contextually, the Indo-Pacific region is strategically at the heart of Asia. The increasing attention on Bangladesh emanates from it being perceived as a bridging nation located at Asia’s very epicenter, so to say. Bangladesh’s prosperity is and will continue to be derived from this role and will also depend on its ability to maintain the best of relations with all countries, whether near or far from it. This was presciently understood by its founding father, Sheikh Mujibur Rahman, who had declared that his country shall strive for “friendship with all, harboring malice towards none.” It was not merely a statement of a lofty principle but an acknowledgement of the reality of Bangladesh’s geostrategic location—the judicious management of which its survival as a state depended on.

At the same time, this locational advantage and importance devolves on Bangladeshis an onerous responsibility. To continue serving as facilitators of free maritime passage in the Bay of Bengal nested in the larger Indo-Pacific region in the vast global oceanic commons, there must be common understanding that it is in their interest, as well interest of all, to ensure that this oceanic region is free, open, peaceful, resilient, and inclusive, with mutual advantage and benefit for all. However, ensuring this requires greater regional cooperation than the peoples of the region have so far exhibited.

Bangladesh has always ardently advocated cooperation among its neighbors. It has consistently punched well above its weight in promoting regional and subregional cooperation, as clearly evinced from its active roles in the formation of the South Asian Association for Regional Cooperation (SAARC) and the Bay of Bengal Initiative for Multi-Sectoral Technical and Economic Cooperation (BIMSTEC). It also has played a proactive role in fostering subregional cooperation within the BBIN (Bangladesh, Bhutan, India, and Nepal) configuration of states. Bangladesh can, and should, now look to work in concert with other Bay of Bengal littoral and adjacent countries (comprising, together, a quarter of the world’s population) to promote economic cooperation. Such economic cooperation could organically progress toward the emergence of a Bay of Bengal economic community, whose aggregated GDP would only be surpassed at current rates by the United States, China, and the European Union. Bangladesh can play a leading role as facilitator of this process.

Given the Bay of Bengal’s centrality, the United States needs a stable and prosperous Bangladesh, just as Bangladesh needs the United States as a continuing interdependent development partner. Bangladesh also needs to demonstrate its role as exemplar by ensuring better governance of itself, based on respect of exemplary standards of social justice and egalitarian rights for all its citizens as well. In this endeavor, the United States with its head start of over 250 years in nation-building and state consolidation, can draw on its own experience and assist Bangladesh, which embarked on its journey as an independent state a mere 50 years ago, in capacity building and institutional development toward an inclusive rules-based society, avoiding the pitfalls that the United States itself faced and is still facing to some extent.

For this purpose, onsite visits and exchanges to U.S. counterpart institutions could play a salutary role to help strengthen some of Bangladesh’s fledgling institutions. Additionally, U.S. assistance in strengthening research and development capacities within Bangladesh would be invaluable to help the country in developing intrinsic resilience. Priority areas would likely be in the field of preventive medicine (particularly vaccine production), such as upgrading digital nationwide medical infrastructure and facilitating knowledge and skill development in technical service industries.

Bangladesh has historically been part of an ancient Indo-Pacific connectivity, and it has declared that it shall continue to be a part of ensuring future connectivity in the region. It is indeed in Bangladesh’s interest to advocate and work for an open, resilient, and interconnected Indo-Pacific. Its own continuing sustainability as an independent, sovereign, prosperous nation-state depends on this vision. As an increasingly self-confident Bangladesh moves away from a sense of obligatory dependency that defined its relationship with the United States in the last 50 years, it is in the United States’ interest to promote a sense of growing interdependence with the relatively new nation-state that is Bangladesh looking ahead at the next 50 years.

Tariq Karim is the Director of the Centre for Bay of Bengal Studies at the Independent University in Bangladesh and a member of the Board of Advisors at the National Bureau of Asian Research. Ambassador Karim was formerly an advisor to the World Bank for Regional Integration, South Asian Region, and from August 2009 until October 2014, he was Bangladesh’s High Commissioner to India with the rank and status of a minister of state. He has also served ambassadorial assignments in Pretoria, Tehran, and Washington, D.C.